We’re sitting in the small propeller airplane on the way from Nuku Hiva to Tahiti, reflecting over our wonderful sailing adventure with Vinni and Carsten around and about the Marquesas. In the seat back in front of me is a magazine with an article about the Belgian singer Jacques Brel. In 1974 Brel bought a 62 foot sailboat, Askoy II, with the intention to sail around the world. In November 1975 he dropped anchor on Hiva Oa and never left.

The landscape is indescribable

Brel fell in love with the landscape and the people of the Marquesas. He had left his stressful life of concerts and recording studios behind and here he found the peace and quiet he sought. He was also looking for a new quality of life and he also found that here in his alliance with the local population against the French bureaucracy and the government on Tahiti.

Brel, aside from being a sailor also had his pilot’s license and he purchased a twin engine Twin Bonanza in 1976. He transported sick locals to the hospital on Tahiti and delivered medicine to the outlying islands. He was know for being fearless and flying in any weather, even landing on Ua Pou where the runway starts at the beach and runs uphill in between to mountain ridges. Once you start your landing, you are committed – there is no bail out. We drove past the “airport” – it requires a lot of nerve to land there.

Sailors still come to the Marquesas with a mission. Kevin Ellis, owner of Nuku Hiva Yacht Services, broke off his circumnavigation here. He arrived, met the beautiful Annabelle, sailed on but return shortly thereafter – Annabelle’s charms pulled him back and he moved here permanently in 2008.

Copra drying in the sun

There are also a couple of  Danish live-aboard dive boats based here – catamarans that take up to 12 divers on a 1-2 month trip where they can learn how to dive and how to sail. We watched as they left in their dinghy at 7 o’clock each morning to go diving at the head of the bay with the hammerhead sharks.

Other boats, the German Saga is here for their second year and don’t know when they will go elsewhere. Carsten says they live by the motto:  “We have no plan and God Damn it! We’re gonna stick to it!”

What was our mission in the Marquesas? We sail our own little “circumnavigation”, each summer in the Greek isles. We grabbed the chance to try real cruising in the big oceans and sail along with Vinni and Carsten.

Lene tested her hand at driving the boat

While Ove relaxed in the shade

We were met with a stress less daily routine – it was almost like meditation. Get with the sun – go to bed with the sun. Unforgettable sailing on the BIG ocean and dolphin shows at the bows. Magnificent scenery as we drove around both Nuku Hiva and Ua Pou.

does it get any better than this? 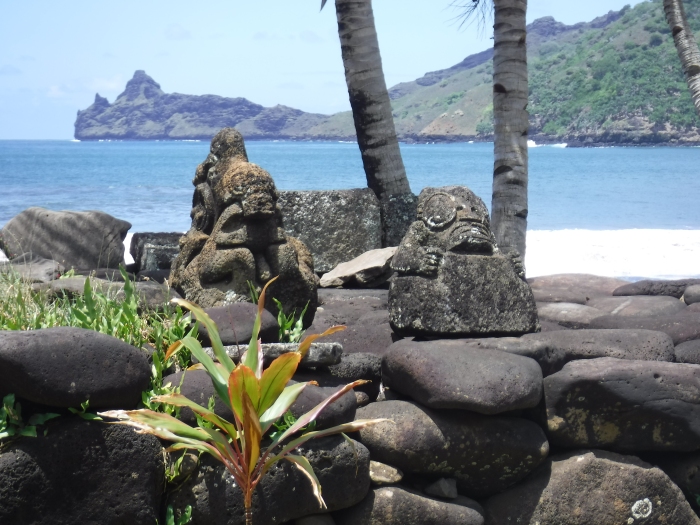 Small tikis by the beach

It was marvelous to watch Vinni and Carsten handle their boat. It was clear they have sailed half-way round the world together. Capri has become a part of them, or they a part of her, just like a good slalom skier who never thinks about his skis – they are part of his legs.

They know exactly what is best to do when the wind blows up, when the swells start running high, how to secure the dinghy against wind and weather. Three years together, round the clock, leaves its mark.

Then there are the small missions in the daily life – what will we eat, what to drink, which games shall we play. Vinni succeeded at here mission and won the overall title in Mexican Train, a domino game  we play every evening.

Sailor missions also entail reading the weather and ensuring that the weather windows are adequate for sailing. Finding the right anchor spot when we get there.

But the big mission was picking all the free fruit as we drove around the islands: bananas, avocados, mangoes, papaya, carambolas, pamplemousse.

Sometimes the fruit is up high – here picking guava

The negative surprise in the Marquesas was the risk of ciguatera – a poison that you get from eating reef fish. The fish pick up the poison from eating a certain type of algae that grows on the corals. The higher up the fish food chain, the greater the chance of getting poinsoned. Carsten told us about a Russian family that was poisoned last year by eating fish they caught. Ciguatera is found in the Caribbean, the Pacific and the Indian oceans – anywhere where there are coral reefs. So much for my dreams of snorkeling and speargun fishing.

The locals only eat fish that are caught in deep water, tuna, mahi-mahi or wahoo. We ate a lot of tuna, especially Poisson Cru, tuna in coconut milk. Even Lene, who has been a vegetarian for 20 years, surrendered and ate it. 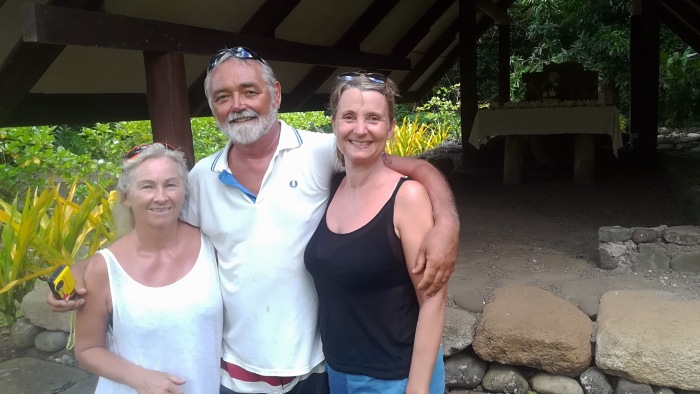 So we aren’t Jacques Brel, Kevin or Saga and stayed in the Marquesas, but the experiences we had with Vinni and Carsten have been unforgettable and we will remember them remember them forever. Polynesia is fantastic, the culture is friendly while still being exotic. Vinni and Carsten did their utmost to give us an experience we’ll never forget and we could feel they had this as part of their mission.