Fort du France, for those who have never been there, is an open bay. Completely open to the west. Now normally, this is a good thing, since the trade winds always blow from the east and the Atlantic swells also come from the east, so lying at anchor is easy peasy, protected as you are, from both the swells and the wind.

Of course, on occasion, the wind does blow from the west, but in general that is rare (not so rare when Vinni and Carsten are sailing in the area, sigh).

I had dropped Vinni at the airport for her flight back to Denmark and gotten back to Capri. It was Sunday and I prepared to move her to Le Marin, where there is a marina she could lie safely in while we both were in Denmark. The weather report noted that the wind would change and come out of the east, blowing about 5-10 knots (10-20 kilometers per hour).  So only a very light wind, nothing to worry about.

Monday morning I got up, noted that the wind had turned to the west and was probably blowing a bit harder than promised. Nothing to worry about though. I dinghied into town to arrange my flight tickets and do a few other errands that needed doing.  That took a couple of hours.

By the time I got back to the dinghy, the wind had picked up and it was now blowing something 25 knots and constantly increasing. The swells had built also and now it was difficult getting down into the dinghy with the swells breaking against the dock. Back out at Capri, it was really difficult to get on. Capri’s stern platform was rising and falling a couple of meters and pounding down into the swells. Getting the dinghy close, grabbing onto Capri, tying the Dinghy on and then timing the leap onto the bathing platform was both interesting and entertaining to say the least :-).

But I managed, of course, or else you, dear reader, would not be reading this, but rather my obituary or something similar. Safely on board, I was firmly convinced that I was going nowhere.

As you can see from this video, the swells were building and the boats were getting quite a rocking – and just to make everything more interesting – we also got some rain…………..

Ahhh, but the best laid plans of mice and men, as they say, frequently go astray. The winds kept picking up, as did the swells and it was time to begin thinking about our anchor.  Would it hold? The wind had shifted and that meant that Capri was now facing west instead of east and that in turn meant that the anchor had to turn 180 degrees and reset itself.

Had it reset itself correctly? Would it hold as the winds and the swells continued to increase?  Only time would tell, of course and I stayed in the cockpit, keeping a wary eye on Capri’s position to determine if we starting dragging.

Around the middle of the afternoon, I noticed an American ketch, that had been lying behind us, had moved. I checked again, yep – she had dragged and looked like she was continuing to drag. I could see their dinghy tied up at the stern, so they certainly were on board.  I dropped down into our salon and tried calling them on the VHF – no answer – undoubtedly they didn’t have their radio turned on.

CRAP! Nothing to do but make the flying leap into our tossing dinghy and sail over there. By the time I had gotten into the dinghy, started the engine and gotten over there, the boat was aground. I watched it hit and immediately upon hitting the couple on board was up and on deck. They tried everything to get the boat off the shore, but the winds were pressing it further and further onto the sand and rocks. A couple of other dinghies came to help, but even with 3 of us, we couldn’t pull her free.

Finally, the pilot boat came over to assist. As soon as we got a line from the pilot boat to the ketch, I bowed out and went back to Capri. With no one on Capri, I was worried about what would happen if her anchor dragged.

As you can see from the videos, the ketch finally got free and sailed for other anchorages where they could lie, protected from the wind and swells.

As the afternoon and evening wore on, more and more boats dragged. But everyone was on watch and as they dragged, the crews upped their anchors and sailed off to find other anchorages. Capri stayed put and I watched most of the other boats leave.

The weather reports had noted that the winds would die down by late evening and sure enough at around 9-10 p.m. I could feel the winds slowly dying.

I looked around and decided that if our anchor had held all day and evening in the hardest weather, then it would continue to hold through the night when the wind and the swells were ebbing. So I went to bed and slept like a baby.

Getting up, I could see that we were only 6 boats out 25-30 that were still at anchor in the bay.  The rest had left yesterday or during the night.

So once again, I was happy that Vinni and I had decided on a 30 kilo anchor and 100 meters of chain. The anchor bit and stayed set hard – even though it turned 180 degrees, it reset immediately and stayed set.

Our little motto on board Capri: “In Mantus we trust” was proven right again. We’ve had absolutely zero problems with our Mantus anchor – and we sleep like innocent puppies, without a worry in the world while at anchor. 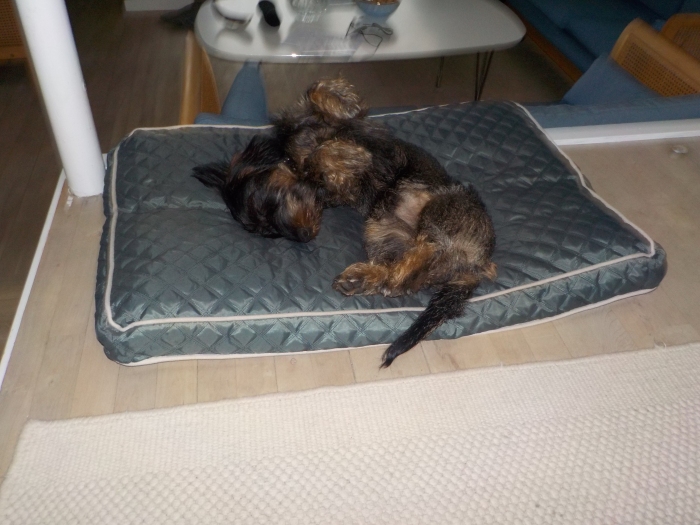 Can you be more innocent that this?