After our little run-in with someone’s man overboard mannequin test dummy (see previous post), we turned north and set all our sails. We had 12 knots of wind coming from aft so we hoisted everything we had and all of a sudden we were doing 6.5 knots. Excellent sailing and we got ourselves divvied up into the watches for the night.

Bente and Lars sacked out

We soon became aware that we were surrounded by sailboats (On our AIS) with wonderful names: Intrepid, Audacious, Valiant, Dauntless, Fearless , Courage and others. These are powerful names and invoke the grand era of American sailing back when the US always won the America’s cup. These are the names of famed 12 meter boats. 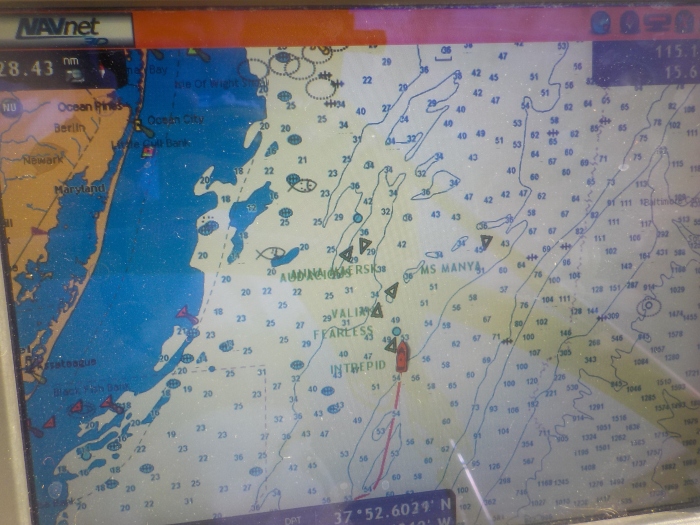 surrounded by boats with the famous names

They weren’t the 12 meter boats – but they were the Cadet boats from the US naval academy at Annapolis – apparently they were out training and going to New York.  They are 14 meters long and carry a crew of 10, versus Capri at 12 meters and a crew of 2 (now 4 with Bente and Lars).

Despite the obvious disadvantage, Capri hung in there and we stayed with them all night long as we blasted up the Maryland/Delaware coasts. Come morning- we were still in the running, albeit slowly being bested by most of the boats. The winds were running 14-16 knots and in those winds the Navy boats with their full crews were flying Spinnakers, while we were only flying our mainsail and our genua. By midafternoon almost all of them were in front of us – but not by much.

Late in the afternoon, we put in 2 reefs in the mainsail as the seas started getting rougher.  Bente had gone below and I heard a crash as a wrong wave hit Capri. It sounded like a door being slammed and when I looked below, I could see Bente half sitting on the floor looking up at me. Shit she fell when the wave hit.  I sent Lars below to see if she was all right and a few minutes later he came up announced that she had hit her shoulder blade on the Captains table and thought perhaps she broke it.

Ok – Time to see where we could make harbor. The closest was Cape May, New Jersey, about 6 hours sailing, so we changed course and headed for the harbor. We were making 6.5 knots almost the whole way, but it still took us close to 6 hours.

Coming into Cape May harbor, there is really only one Marina that could take us (we have a 7.5 foot draft and the rest simply aren’t deep enough). I called ahead on the sat phone and they said we could dock on their face dock.

It is a long sail from the Cape May inlet to the South Jersey Marina. It was dark, dark, dark and Vinni had  to sit on the rail with our searchlight and look for the marker buoys, telling me, “Red on the right, look now” and then with her shining the light I could just manage to see the buoy. It also became a little bit foggy and this was just wonderful (ain’t life grand?).

35-40 minutes later we were in the marina and docking. After we got Capri tied up, I called 911 and asked where the nearest emergency room was and did they have a telephone number for the local taxi. The taxi came and Bente and Lars disappeared into the night.

Several hours later they came back and yep –Bente had broken her shoulder blade, so her sailing days for over for now. We decided that they would rent a car, drive up to New York and meet us there. But first, we wanted to spend a couple of days in Cape May seeing this wonderful old beach town, America’s first real beach town.

All of Cape May’s downtown is on the national list of historic places and many of the individual building are also listed. The houses were mostly built in the period between the end of the civil war and the 1890’s and reflect that architectural period.

And they are just beautiful.  What a pretty town! 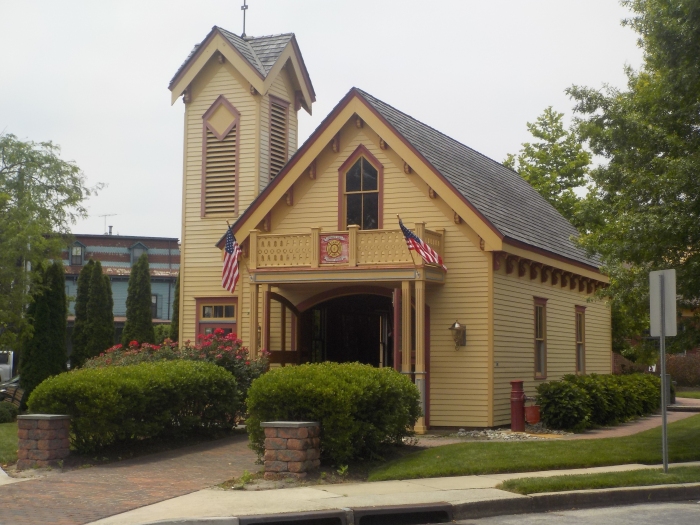 A couple of days later, Vinni and I left in the morning fog (yes fog!), edging ourselves out through the long harbour and inlet until we were finally at sea. By mid-morning the fog was starting to dissipate and we could set our sails.

The clear weather continued until 2 in the morning when the fog rolled in again. This time the fog got serious and soon we diddly – we could barely see the front end of the boat. We had our radar going full blast and  could pick up the buoys and a number of boats.

One of them was a sailboat on a parallel course and when he showed up just off our bows, I gave him a blast of our fog horn to let him know we were right there.  He took that to mean that we were in trouble and turned to come over close. After we assured him we were fine, the fog horn was to tell him to be aware of us – he took off through the fog.

We originally were going to meet Bente and Lars at a marina in Sandy Hook, but when we got there, they didn’t have room so off we went to Liberty Landing Marina, just across from Manhattan.

The trip up through New York harbor in the fog was unbelievable and you can read about it and see the pictures and videos in our next post.