In Great Bridge, there is not only a great bridge, there is also a decending lock, which we must go through before we can breathe freely on the blue ocean and set our course directly for New York City. But before we can enter the lock we must wait for the rush hour over the great bridge to finish at 10 am. As usual, we are early risers so we have plenty of time to prepare for off coast sailing. One more time, Vinni takes us through safety procedures, roles and responsibilities, we fit deck vests and safety harnesses, and prepare ‘grab bags’ with passport, insurance papers, air tickets, maritime certificates, credit cards, etc. And still we have plenty of time to wait in line with 6 other boats in the brown, brackish water before the heavy traffic on the road with the insistent name, Battlefield Boulevard, comes to a halt and the bridge goes up. The color of the water is not caused by dangerous, manmade chemicals. On the contrary. The slightly disturbing color, which has followed us with some nuances for many days, is due to harmless tannic acid that enters the waterway from decaying tree leaves and roots, and turns the canal to a weak coffee or tea color. Some places, at the numerous inlets where the tide runs fast, the color changes dramatically into fascinating varieties of blue, grey, turquoise and brown. Indeed, travelling the Atlantic Intracoastal Waterway is magical.

Locks are a seldom experience on the eastern ICW. In fact, the Great Bridge Lock is the only one along the full distance from Key West to Norfolk, unless you fit into the Great Dismal Swamp where you will enjoy to smaller locks. Our lock here at Great Bridge is long, 600 feet, and it will take us 3 feet down. The lock assistant tells crews on deck to wear deckvests, and help our around the bollards so that we can follow the sinking water, and be ready to go when the lock opens again. Naturally, Capri is well fendered and the whole maneuver is quickly and safely carried out.

Apart from the moron on the motor yacht ahead of us who gives to so much throttle that he forces our stern against the lock side making our departure less elegant. But with a bit of swearing and a solid push from Capris bow thruster, Carsten quickly has regained Capri’s course to open water. All in all: Piece of cake, the sun is shining, and no wind. At noon, as we reach Norfolk’s southern, gigantic port facilities, we have to realize that we definitely have left the varied civilization and rich nature of the Atlantic Intracoastal Waterway behind us. One of the more bizarre impressions was a trailer park – normally not the most convincing evidence of American prosperity – in the middle of the deserted swamp where one of the residents at what must have been the most prominent spot had parked his helicopter.

If Norfolk downtown has a specific charm if on land, I do not know. But from a passing yacht this charm whatever seems a bit theoretical, although the immense, industrialized waterfront in the beginning twists its way quite spectacularly. But as the water opens and the waterfront straightens out, Norfolk port is just impressive – big time impressive – with vast commercial terminals and huge naval yards.

Especially, two players stand out. First of all, naturally, US Navy, which already at the very first miles of the long port is manifest with training facilities, soon followed by yards, provisioning and equipment facilities all the app. 20 nm to the Atlantic Ocean. Even though one is fully aware the US Navy is the world’s largest naval force it makes quite an impression to see no less than seven aircraft carriers, two of which apparently new builds, with floating barriers and myriad of ward-off boats, as well as an infinity of naval aircrafts and helicopters starting and landing from the nearby fleet base.

And then, for Danes, the well-known seven-pointed star on the light blue background which brings evidence about the global presence of the Maersk empire. In Norfolk with the huge maersk container terminal but also as the home of Maersk Line Limited, the subsidiary that operates the United States largest fleet of merchant ships. 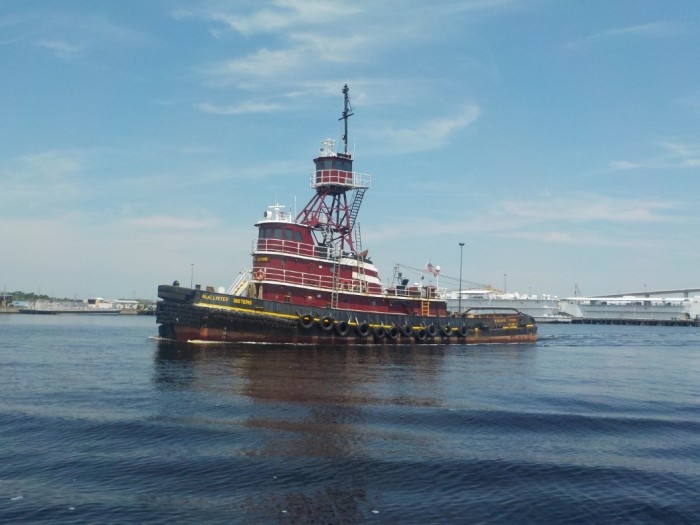 Not surprisingly, maritime traffic here is intense. But as the port opens to the ocean, and we can move steer more freely, we set sails, even though the wind is weak. What an incredible pleasure it after more than a week’s motoring just to listen to wind and water, distant engines, and the of course all the naval toys above us. In two days, if weather permits, we will be at Sandy Hook and the inner approaches to New York Harbor. Probably, that will be an experience of mythical dimensions, and make the entrance to the port of Copenhagen which in its own way is quite spectacular slightly less impressive. 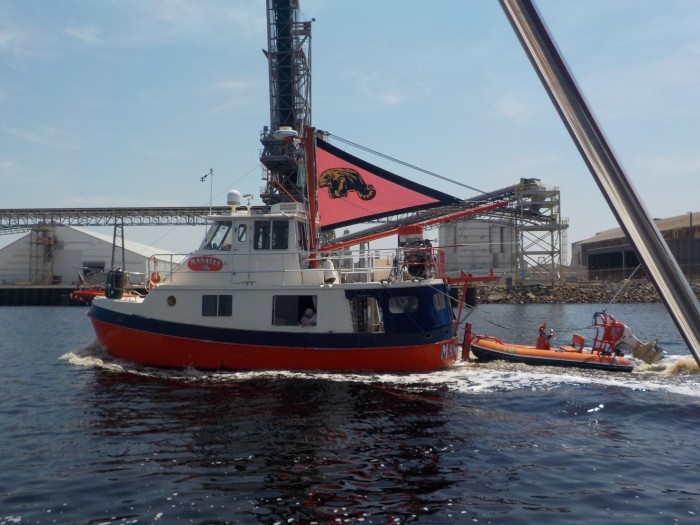 A ’Great Looper’, which in abundance is inspired and named by the rather cute, and clumsy Manatee, which Vinni and Carsten have seen live far to the south in the Intracoastal.

As Norfolk slowly disappears behind us, and we engage more and more with the lazy swells of the Atlantic, we get a taste of the big drama. A little in front of us on the port side, we notice a small, red floating object in the surface. I see as a toy thing someone at the beach has lost. Carsten is not so sure, he wants to take a look, may be it could be a life jacket. Carsten is right, and as we closer it looks quite nasty in fact. 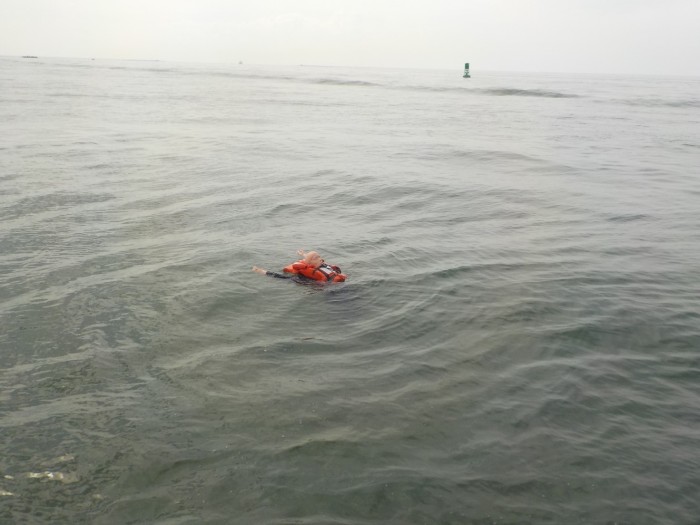 The life jacket is manned, so to speak, with a pale and lifeless body. Fortunately, we quickly realize that is only a dummy, which either has taken to the sea on its own or has been left by a search and rescue drilling team. On the radio, Carsten contacts the Coast Guard, which is not that keen to act. Instead they ask us to take the dummy with us to New York, where they will pick it up. But thank you no, we are not tempted to bring this cold and creepy, fellow seaman with us. Carsten provide coordinates and good luck for a new SAR drill, and off we are, New York is calling.

Weather is perfect, although the wind is a bit to the weak side. Now it’s time for some personal hygiene: Hot shower at the aft platform and on the Atlantic. That’s some sort of a neat experience for a wannabe ocean sailor whose only experience with the high seas has been a long summer’s delicious, racy dinghy (coastal, I have reluctantly to admit) sailings in the big waves that, at their best, came freshly in from the east to La Rochelle, France.

But here, on the other side, it is very calm for the first 24 hours that also include a quiet, beautiful and starry night with shooting stars, and what have you. On the chart plotter, we have exciting AIS company of what we believe must the legendary US 12 meters Intrepid, Audacious, Valiant and Fearless, which are closing in on us from behind. Quite so exotic it was not, we learn some days later at the pier in Liberty Landing Marina in New York, where we are greeted by some young, US Navy dressed people. – Oh, you are the Capri crew, we saw you on the plotters for quite some time in the Atlantic.

That was the crews from the United States Naval Academy’s Offshore Sail Training Squadron’s (https://www.usna.edu/Sailing/osts/index.php ) training vessels, Navy 44s http://www.bwsailing.com/bw/boat-reviews/navy-44/. I have to admit, it was quite comforting that they had noticed our ‘strong’ presence at ocean.

But before we reach New York, we have to face a new development. The wind adds, turns unpractically to the north, bringing rather high and unpleasant waves. The combination of fierce winds from the north and the Gulf stream from the south makes an unattractive cocktail. We decide to bear off and head straight east to Cape May. There we will wait for fairer conditions.

Barely, the decision was taken and the new course found before in the cabin Bente, my wife, lost her grip and fell hard against the cardboard. Luckily, is was not her head that took the impact, but her shoulder which the combined medical competences aboard (Bente and Vinni) diagnosed as probably, a broken shoulder. From one second to the other, Cape May was transformed from a pleasant in-between to a much-needed emergency stop. Without dwelling too much in details about the long ride – very exciting entry to Cape May Southern Marina in the dark – to shore and medical assistance, we can shorten it down to, yes, a broken shoulder, no need for operation or plaster, but plenty of heavy duty pain killers and no heavy seas for the coming days. Danish travel insurance company and local agent highly efficient, effective, and caring. After two nights at the pier, and some very good sightseeing in Cape May, Bente and I travelled overland by rental car and one overnight stay in a motel in Seabright to meet Vinni and Carsten again in Liberty Landing Marina just opposite Manhattan on the Jersey side. 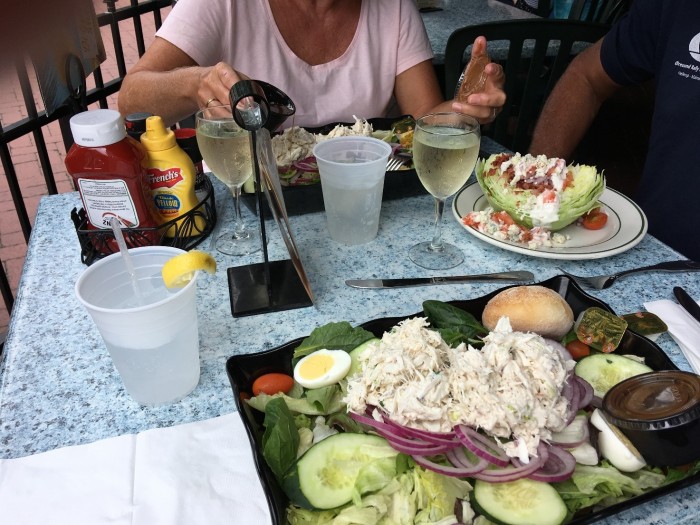 Naturally, for us, Bente and me, the entry New York was not exactly what we had hoped for. But in its own way, by car, rather exciting, as well. And we found Liberty Landing Marina in the first go. Quite some navigators, huh? In another piece of narrative, Vinni and Carsten have dealt with their experiences sailing into New York, and I am sure that, if we had been with them, we would also have been very touched and sensitive – even though we would not have conquered the mighty Atlantic. Nevertheless, and by digital means (Iphone with Isailor and AIS), we were with them all the way from the Verrazano Bridge, passing the Statue of Liberty, and then finally the huge Colgate clock on the starboard side of the entry to Liberty Landing Marina and dock D14, where we took their lines. That was quite something as well: Welcome to New York!

Whether there is Airbnb in Liberty Landing Marina, I cannot say. But if so: Do not hesitate. The views, the skyline of Manhattan is matchless. All day, all night, and in all kinds of weather. 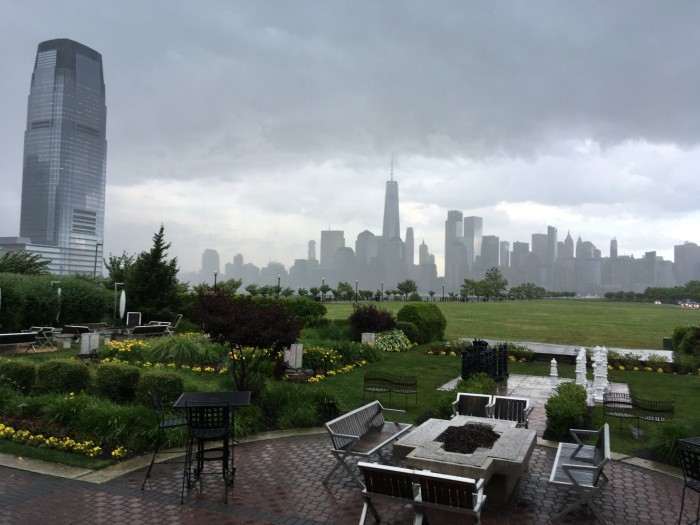 And with the little, yellow Liberty Landing Ferry, you are only 8 minutes and 7 dollars from Manhattan (booklet with 10 one-way trips, 55 USD).  With that and a short walking to the tube, the again united crew of Capri enjoyed some exquisite excursions to among other things, the Cloisters which is one of my favorite, strange places in NYC. Thanks to an eccentric art collector and good Rockefeller funding, a (to be exact, four) genuine, medieval, European monastery, rebuild in the new world on the northern tip of Manhattan – a travel in time between centuries. And then we managed to take a stroll on the fascinating High Mile between 14th ST and 34st ST in Chelsea.

Are Vinni and Carsten joining a monestary?

Finally, Vinni and Carsten took us for a full day excursion with Capri through the inner approaches to New York Harbor, under the Verrazano Bridge and back towards Manhattan’s breathtaking skyline, and lunch at anchor a stone throw from the Statue of Liberty. That was fxxxxxx incredible and truly matchless. Memories for life.