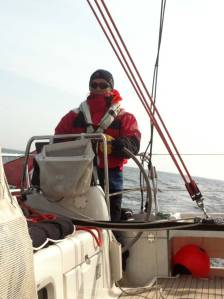 Ok, so as you all know, Vinni and I are getting ourselves together for a circumnavigation starting next year. One of the items we need is a wind vane. For landlubbers, a wind vane is a self-steering mechanism that uses the wind to steer the boat. We do have an electric autopilot, but they do use a lot of electricity, meaning we’d have to continually charge the batteries. The wind vane uses no electricity, just the ticket when you are going to spend 3-4 weeks on the ocean.

I bought a used Aries wind vane and the manufacturer just happens to be located in a little harbor in western Denmark called Dyvig. It is about as far from Copenhagen as it is possible to get and still be in Denmark (Greenland excluded). We figured this would be about a 24-hour non-stop sail and after checking the weather forecast, we set off one fine Friday morning in mid April.

Mid April for those that don’t know it or live in warmer climates, tends to be rather cold here in Denmark. The temperature was forecasted to be about 6 degrees C in the morning, rising to 14-15 degrees during the day. Light winds and sunshine and no chance of anything nasty until late Sunday evening. Which meant we had 2 ½ days to complete the sail – more than enough time.

We packed the boat, lot’s of good food an some wine and set off. Yes, the old saw about it being colder than a brick shithouse in February certainly were true. It was very cold out on the water. We had both packed lots of warm clothing, including long underwear etc. Little did we know just how much we would need it.

The Friday was good, albeit as noted cold. But we had a 2 knot current against us going down Øresund and by the end of the afternoon we had only made about 50nm instead of the 75 nm we had planned on. No problem, we decided to spend the night in Klintholm harbour. Weather report was still looking good and we made up our minds til get up early and leave, making up the lost distance with an early start.

Promptly at 4 a.m., we left Klintholm and were away. Brrrr. Talk about cold………..

But the coffee was hot and I made us a good breakfast which we wolfed down. Moderate to light winds, all sails set and the dawn broke clear, but with a wane wintery light. The sun took a long time to burn away the thin clouds, but eventually it began to warm up.

We turned the corner at Gedser and were making good time. I had us pegged to be in Dyvig by 8 maybe 9 pm which was just fine. I’d made a big batch of spaghetti sauce before leaving home and we had a couple of bottles of red so dinner would be late, but what the heck.

Ok – so why is Carsten writing this story just to tell us about a boring sail and what they planned to have for dinner?

Yes dear friends, I checked the weather report at mid-day and now they were saying that the nasty weather expected late Sunday afternoon was going to hit us early Saturday evening. Worse, they had upped the ante a notch or two. Now they were forecasting winds gusting up to storm at 48-50 knots (60 mph for those non-sailors amongst you).

Ahhh the joys of sailing – temperatures would drop back down to 4-5C so all in all, a great time to be snug in a harbor downing a bottle or two of red and snuggled up under the warm covers.  Right?

Only one little problem here. There aren’t any harbours along the way here that our boat can get into. We have a 7-foot keel and they are all too shallow.

Ok time to have a crew discussion. Dyvig is a very small harbor and the entrance is only 5 meters wide (Capri is 4 meters wide) and the harbor pilot notes that in heavy westerly winds, a 2-3 knots current will be running right into the harbor opening.

For those that don’t know – trying to steer a boat with a 3 knot current running up your ass is not for the faint of heart – especially when you are trying to hit a narrow entrance in the middle of the night (the entrance also being unlit, just to make things a bit more entertaining).

Hmmmmmmmmmmm. Ok, Dyvig is not on, but just to be on the safe side, I called Peter Mathiasen (the wind vane manufacturer and asked about the advisability of making this attempt. His advice?  No on your life. Even the locals wouldn’t try it.

But, there is a big harbor, Sønderborg a couple of hours away and we decided to make for that. The harbor pilot said the entrance was lit and had a flashing green light on the starboard end of the pier going in. Ok, no problem.

At 4 p.m. we took in the first reef in our sails as the clouds were building and the winds picking up. An hour later, we took in the second reef. At 7 o’clock, we dropped the sails. The wind had veered and was right in our noses. We didn’t want to tack our way since we wouldn’t get anywhere. The winds were now up to about 30 knots, the temperature had fallen to 5 degrees and the waves were building and we estimated they were a couple of meters and growing.

But we have a good engine and having started that we continued merrily on our way. Oh – did I day merrily? Well we were freezing and we had all the clothes on we had. The wind chill meant it felt like it was far below zero.

Our engine is 55HK and quite powerful. The next three hours we were making only 2 knots going forward and that was with the engine screaming at maximum rpms. The sea was running a 3 knot current against us and the winds were gusting at the full 50 knots. The waves had built up and the period between the waves was so short that Capri couldn’t get her bows up from going over the first wave before the second one came along, which meant the waves were simply running right over her deck.

We thought longingly about spaghetti and red wine (ok, also about a G&T and some cognac – not that we are alcoholics you understand, but something to warm our insides would have been nice). Vinni and I took turns at the helm, the other one sitting in the hatchway warming our feet and hands.

The charts noted that on approaching Sønderborg harbor, there should be a west cardinal marker that is lit and flashing. Well bully on the Danish Maritime authority. It sure as shit wasn’t lit. It was so dark with the clouds and the rain (did I mention the rain? No, I don’t think I did. Nor did I happen to mention it also began hailing). 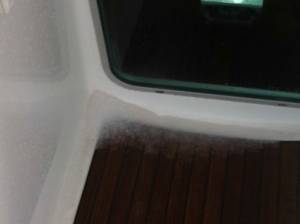 hail accumulating in the cockpit

Ahhh, boys and girls – the life of a sailor. The exhilaration of being at sea. How wonderful.

By now, of course, you’re wondering what else could befall us. I mean, we’re getting hammered and this is absolutely no fun. No fun at all.

We made the turn and are now heading at what we think is the entrance. We now also have the wind blowing right up our ass at 50 knots and a 3 knot current pushing straight towards the shore.

I hoping we’re gonna hit the entrance because we are now moving right along at 6+ knots and I doubt if the engine can stop us in reverse.

This is it. Either Vinni and I have performed an amazing feat of navigation equaled only by Captain Cook (ok – maybe a little exaggeration there) or else Capri and the two of us are going to meet a watery and rocky grave as we pile up on the rocks.

Now as you may have guess, we did hit the entrance (otherwise I wouldn’t be writing this – would I?) and slid right into the main basin.

So – worries over open the red, make the spaghetti etc. Not quite. We still had to dock the boat and while we were protect from the waves, docking a boat in 50 knots is not easy. We sailed around in circles, trying to figure out where would could dock without smashing the boat and ourselves to pieces.

Finally, we made up our minds, picked a spot, put all the fenders we had on the starboard side and went for it. This was a one shot deal – miss and there was no way for us to recover.

We made it, the wind pushing sideways against a short pier. Vinni quickly threw a couple of lines around a piling and there we were. We tied up with all the lines we had, double checked to see everything was tight and then dear friends, we went below and had our spaghetti and wine.

Dear friends, you have no idea how good a hot meal and some wine tastes. One o’clock in the morning and after eating we hit the sack like two badly beaten sacks of potatoes.