I know you all have been sitting on the edge of your seats waiting to hear about our trip back to Copenhagen.

Did they freeze to death? Capsize? 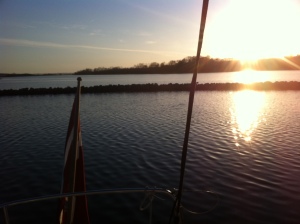 Before I tell that story, I will take a moment and write about Dyvig and my time there. As you may recall, the purpose of sailing to Dyvig was to get a windvane installed. For all you lubberly types, a windvane is a second rudder that steers the boat using the wind.  Meaning it is an autopilot that does not use electricity. On top of that, it is a mechanical construction, very simple and almost impossible to wreck. The fellow we went to visit is Peter Mathiasen, the Danish manufacturer of Aries wind vanes. He is from the southern part of Denmark and typical for that region, a man of (very) few words. 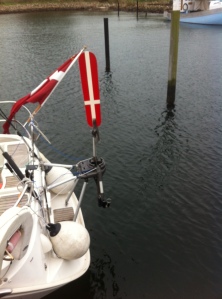 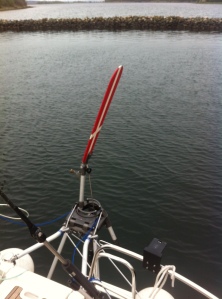 As a younger man, he borrowed his father’s 28-foot sailboat with the express intention of sailing to England for the summer. Which he did. While there, he met the inventor of the Aries wind vane, who mounted one on his boat for him to test.

Of course, when you are young, a thorough test needs some miles and the result was that 2 ½ years later, Peter called his father from New Zealand (no contact until then). Peter admitted to me that this had been a delightful conversation, his father was slightly perturbed (an understatement on Peter’s part here, I believe) that he hadn’t heard from his son or news of his boat for a couple of years.

With a little money sent by his father, Peter sailed home. No pussy he, he didn’t go via either the Panama or the Suez Canal. Instead, his circumnavigation was the old way – by way of all five of the great capes. A single-handed circumnavigation via the capes is what legends are made of – damned few have ever done it. Fewer still in a 28 footer.

As we worked on the wind vane, I got Peter to tell a bit about his journey. Seems he capsized somewhere near the Horn. In his words, “I found out the boat didn’t sail very well with the mast downwards and the keel upwards. Good thing a big wave came along and righted me. Took me a couple of days to clean everything up in the cabin. Which was good, since I then I wasn’t bored”.

A true master of understatement.  But I’ve digressed.

Our wind vane was mounted and I eagerly awaited Vinni. She was in England for a conference and flying back to Copenhagen Friday evening. Did I say Friday evening? Well the flight was delayed (of course), so late Friday evening meant 3 a.m. before she crawled between the covers in our bed at home.

Naturally she was catching a 9:00 o’clock train so 4 hours later, she was up on her way to the train station. Some days, of course, if it wasn’t for bad luck, you’d have no luck at all. Naturally some idiot had to call in a bomb threat to one of the stations which meant everyone off the train and into busses and to make a very long story shorter, she finally showed up at the boat at 4 o’clock in the afternoon instead of 2.

I had the boat ready, she got dressed and we sailed.

I think I’ve mentioned in a previous installment that the channel into Dyvig is really not for pussies or the faint of heart. Neither is the channel going out. It curves and is treacherous with shoals and lots of lovely sand bars that are continually shifting (just so no one has any idea where they are LOL). But we made it out. The weather was cloudy with thick gray masses hanging low down to the water. A good wind and we set our sails and at one point were making 9 knots.

There are two possible routes from Dyvig to Copenhagen. The northern route, which goes through the Little Belt (a long snaking channel with a multitude of shoals and islands), then across Kattegat and around the northern tip of Zeeland. In total about 200 nm. The southern route (the one we used to sail from Copenhagen to Dyvig) is a clear water route. Lots of open water, but several shipping lanes and wind farms etc. that you have to pass through. We chose the southern route for two reasons. First, because we really didn’t relish sailing through the Little Belt at night, especially with only one person awake. Secondly, the weather report noted gale force winds in the Kattegat and we really didn’t need that.

So –  the southern route it was. I rustled up some beans and tortillas and Vinni went below to catch some much-needed shuteye. Three hours later, I woke her. I should have given her another hour of sleep, but that simply wasn’t possible. Not because I was tired. Because I was frozen solid.

We went over to 2-hour watches, simply because it wasn’t possible to be in the cockpit for more than 2 hours. We had the heater running in the cabin below with the temperature set at 20 degrees C, but even so, going off watch it took the first hour in the sea bunk with a duck down duvet over to regain our body warmth. Then sleep for an hour and time to get up and go back outside. 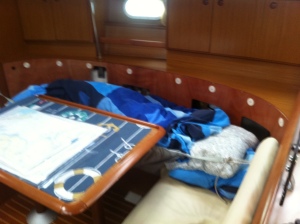 I normally don’t care for “hot-bunking”, but here it was ok. It was simply so cold that it got into our bones.

Mind you – as we found out – it both could and did get colder (really unbelievable). 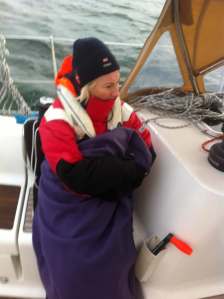 Vinni trying to stay warm on her watch

Sometime around midnight, we heard a Security warning from Radio Lyngby (Danish Coast Guard radio) advising that a 24-foot sailboat near the island of Endelave had lost their engine and was requesting assistance (tow) and was anyone in the area?

Had we taken the northern route instead of the southern route, we would have been close by. But we weren’t so we could happily disregard this request. A couple of hours later, I had just gotten warm under the covers and was beginning to doze when:

Auuuga, Auuuuga, Auuuga – remember the old American war movies when the submarines would dive?  They would sound an alarm  – well, the VHF radio was going nuts. Auuuga, Auuuga, Auuuga. Over to turn off the alarm and switch to channel 1 (as it said on the display).

Radio Lyngby had lost contact with the 24-foot sailboat that had been requesting a tow. At the same time, the weather had worsened and it was now truly blowing a gale. So now, they were asking for any ships in the area to report if they saw or had contact with the 24 footer.

Seeing as we were nowhere in the area, there was nothing we could do, but kept one ear listening to the radio.

I don’t know if they found the boat. There has been no report of a lost boat on the news – so someone must have found them and somehow they must have gotten into port – good for them.

But I digress again.

We continued our sail into the night. Night sailing is a funny thing. Generally, I (and Vinni) really enjoy it. The sky is so star-filled that it is overwhelming, the lights from shore or other ship twinkle out on the horizon and I use the time to think deep philosophical thoughts (like, when can I have a G&T? Who will win the Masters this year? Should I slow down my golf swing?  You know, really important things like that).

This night, however, was radically different. The clouds, as I’ve noted, hung very low. No night sky at all. No horizon either. No twinkling lights of any kind. As a matter for fact, it was much like sailing through a black fog.

In this kind of night – it is so easy to become totally disoriented. I was looking at the bow and I was certain the boat was turning to starboard. Looking at the compass, the autopilot was holding Capri rock steady on her course, but my eyes were telling me we were turning.

No sounds either, just the swish of Capri’s bows slicing through the water and the waves slapping against her side.

I was wearing a set of silken long underwear, blue jeans, two pairs of socks and boots. On my upper body I had the silken underwear, a dickey turtleneck, a long sleeved polo, a thick windproof woolen sweater and over all this, my sailing foulies, both pants and jacket. I also wore a thinsulate cap and gloves.

I was still freezing.

Dawn did finally come and along with it a rise in the temperatures, so now it was still cold, but not bone-chilling cold. I baked some rolls, and these, combined with fresh tea and coffee got us on top again.

Gedser came and we passed it. Later that afternoon we passed Møns Klint, the Danish white cliffs of Dover. Now we were in the home stretch and turned north towards Copenhagen. 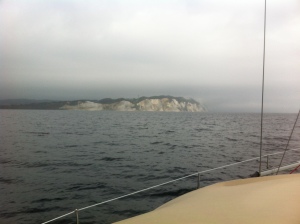 Just, of course, as the wind direction changed and we got hit right on the nose by 20 knot winds. The temperature started dropping and just kept going (of course, we hadn’t hit bottom so to speak regarding the temperature – we would get much worse). The winds built the waves up and the chop got higher and the period between the waves got shorter. Capri was literally flying off the top on the waves and hitting hard on the next one. In Danish, we call this “pounding pilings” and the boat sounds and feels like it is being smashed to bits.

It is difficult to sleep when this is going on. We were 8 hours away from Copenhagen and it was going to be hell.

Did I say it was going to be hell? Dear friends – it was hell. Capri was smashing through the waves the temperature low and the wind chill factor made it feel much, much lower. It wasn’t possible to sleep. Every time you’d just about be dozing off, a particularly high wave would come along, you’d lift completely off the seabunk, Capri would slam into the next wave and be stopped in her tracks, the noise would be deafening and then your body would hit the mattress again.

Oh joy – how wonderful – especially when you are also freezing to death.

3 hours from Copenhagen, the weather cleared up, the clouds disappeared, and the wind and waves died down.

This was great! Unfortunately, now it got really cold – the temperature dropped to below freezing. 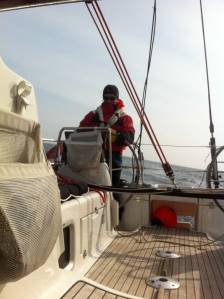 We backed Capri into her slip in front of the house at midnight and left everything inside of her. I made us each a strong G&T and then some spaghetti and we split a bottle of wine and then we crawled (literally LOL) into our bed.

Glad to be home. I’m leaving on Friday to sail Impromptu from the UK back to the Baltic and I truly hoping the weather warms a bit by then

I shall report on that trip along the way.