We’re spending chrstmas here on St Lucia. My daughter, AnneSophie, her husband Jamie, son Viggo and the 3 year old terrorist, Frida are coming to visit.  Fortunately they are sensible people and have rented a villas at Windjammer Landings, just a few miles from Rodney Bay.  So they get to be able to be by themselves and we also get to be able to be by ourselves on the boat as occasion demands.  Four adults and two kids on Capri would be a really tight squeeze.

Vinni and I rented car and picked them up at the airport at the other end of the island (naturally).  This is a 90 minute drive and it crosses the high mountain ridge that runs down the middle.  Lots of switchbacks and hairpin turns for those that enjoy that kind of thing. Also St. Lucian drivers who seem to feel that cars are meant to be driven at full speed, no matter how tiny or crappy the road is. (just me complaining again – vinni says I’m becoming a grumpy old man – what does she know?)

Everyone cleared customs except Jamie – seems the airline lost one of their suitcases and he was still inside waiting in line to fill out all the forms etc. About an hour later he emerged and we filled the car with luggage and people and drove to Windjammer Landings.

Nothing wrong with that place – nothing at all.  3-4 swimming pools, big beach, all the water toys you could want, paddle boats, hobie cats etc etc. 4-5 different restaurants and in reality you don’t need to leave the place at all. Their villas sported a full kitchen, terrace and a drop dead view (see below).

The Christmas week was spent just hanging out.  Vinni and I drive up to their place in the morning, hang out all day (tough life hanging out at swimming pools and beaches) have dinner together and then we go back to sleep on Capri.

The one day Jamie and I played golf on the islands only course.  Not a bad course, nice greens but at bit windy at times.  Jamies got a good swing and if he practiced he’d be a good player – but like everything else, he has to make priorities and so far golf hasn’t gotten far enough up the list.

One day we all took a break from each other and Vinni and I drove around the island (even narrower and more hairy roads than the one going to the airport).  But interesting of course.  WE got to see some of the local villages, ate lunch at a local place (which despite being local wasn’t all that cheap). The food was good and the service pleasant and smiling so who can complain?

Here’s a video of some of the places on the trip.

I was great to see Anne Sophie and Jamie and get to know the kids better. I’ve never spent a lot of time with them but got the chance here.  Viggo is now 5 and  becoming quite the little adult.  He makes friends with other kids immediately. With his good looks and charm – he’ll be a holy terror with the girls when he reaches his teens. 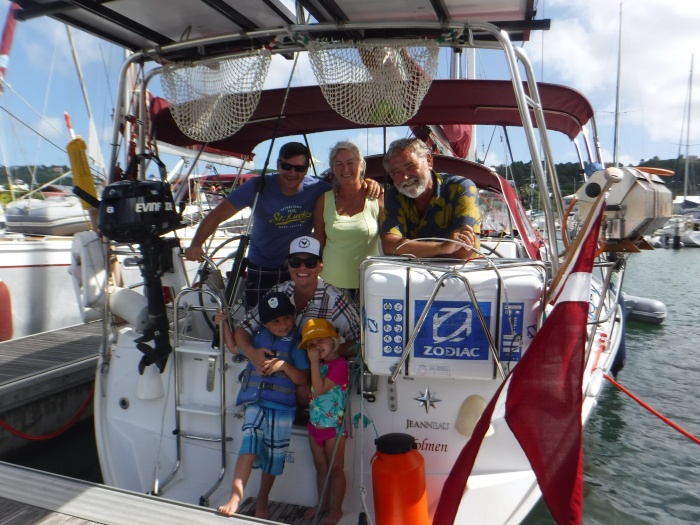 Vinni and I will go visit them next fall in SF – can’t wait to see them and see how much the kids have grown.

Anne Sophie and Jamie and kids were flying back on December 31 so Vinni and I sailed on the afternoon of the 30th for Bequia, an island south of St. Lucia. Bequia is the northernmost island in the group called St. Vincent and the grenedines. We’ve heard they have a great fireworks display new years and it should be an easy overnight sail, getting us in early in the morning, so we can rest up and get ready for a rocking New Year’s eve in the Caribbean. Our friends Hatti and Phil are already there – so we’ll have someone to celebrate with.