Well across the atlantic, we stayed in Rodney Bay for a week or so. Our “wailing wall” was empty (surprisingly after a 3 week passage), but we needed to provision and recover (read – sleep). Rodney Bay has everything you could want, with 4 supermarkets within walking or dinghy distance so the day after we landed we set off to fill the refrigerator etc.

Prices are in either EC (eastern Caribbean) or US dollars, you have to be careful  and make sure you know what you are being quoted before buying. Also many stores seem to like showing prices without VAT and then you get a surprise when you buy.

We were having some difficulty with the exchange rates the first couple of days. Then reality hit us.

Sheeet! Everything here is ungodly expensive. The prices are even higher than in Denmark (which is saying something since Denmark consistently ranks as one of the most expensive countries in the world). We realize that many things are imported and therefore expensive due to shipping and import duties, but even local items, like pineapples, avocados, tomatoes are unreal. Hell, even coconuts are outrageous.

Food at the supermarkets is so expensive that it is almost cheaper to go out and eat (not quite – restaurants also know what they want for their food). Liquor is really expensive, except perhaps for rum.  The locally brewed beer costs about $1.50 US in the supermarkets for a pony bottle (25cl).  Cheapest wine is about $12-15 US per bottle.

All of which could drive a man to drink (if he could afford it).

Enough of that. After a week we hightailed it out to a place on St. Lucia called Marigot Bay, a hurricane hole south of Rodney Bay. 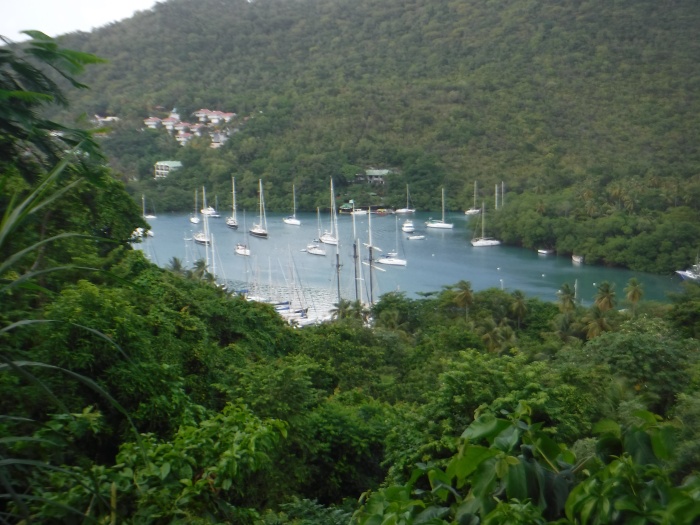 What’s a hurricane hole? This is a by where you stand a chance of saving your life and your boat if a hurricane comes along – no guarantees of course, but basically a well-sheltered bay where you might (or might not) make it.

Here’s a gander of the Bay and the boats in it. Super yachts make their appearance here all the time. It is a favorite watering hole for the rich and famous (like Vinni and me – well the famous part at any rate – or perhaps infamous?).

We stayed on a buoy, at a special rate for ARC sailors – only $20 US per night. The great thing about being on the buoy is you are considered to be a guest of the Capella hotel and resort – meaning you can use all their facilities, such as choice of 3 swimming pools, 5 bars, fitness center, Spa and gangs of other things.

Not bad for 20 bucks a nights.

We hung around here for 10 days (this was about as good as it was going to get) despite the weather. It rained a bit, but we did manage to hike up the hillsides a couple of times (exercise is important – get some and you have a good reason to drink a beer).

Vinni has been used to driving sports cars (BMWZ3 and Mercedes two-seater) so she was missing blasting along.  Out here, your dinghy is your car – you use it to go everywhere, shopping, carry groceries, to the bar, shore – whatever.  I know some of you have seen this video before but its a good one so here you go again.

Finally, we headed back to Rodney Bay. My daughter and son-in-law (whom I actually like) and the grandchildren (2) are coming to visit us for Christmas – The best Christmas present they could give us – can’t wait and they’ve booked themselves in at a resort called Windjammer Landings, just down the road from Rodney Bay.  Wind Jammer has lots of pools and beaches and stuff to do with kids so everyone will probably be happy. More about that later.

Next episode will be christmas and new years – then we’re off exploring the caribean islands.