Nice easy overnight sail to Bequia.  Down along the coast of St.  Lucia in lee of the land and then a quick run across the channel behind St. Vincent, another channel then along Bequia and into Admiralty Bay, drop anchor, eat some breakfast, get some sleep and then party all New Year’s eve.  Right?

Uhhh.  Wrong. The above is the way it was supposed to be, so we didn’t really get Capri completely ready for sea.  We didn’t set up the seabunk (man would we regret that!), didn’t pack away the cockpit table and generally just sailed off.

The first part – was ok.  We had a good wind and Capri waltzed along at 6 knots. Vinni said she would take the first watch so I laid down on the cockpit deck on some cushions and got to sleep.  Which didn’t last long because the wind died and the waves picked up.

Sheeeet! No sleep for the wicked.  Things kept getting worse as the waves got worse and finally we were out of the lee of the land and in the channel between St. Lucia and St Vincent, where we promptly got hit by really big waves and winds of 20+ knots. A couple of waves broke across the cockpit and we got water in (so much for sleeping on the cockpit deck).

Life got a little easier when we got behind St. Vincent, but it was a temporary reprieve. We would get knocked about when we entered the waters between St. Vincent and Bequia.

Did I say we’d get knocked about?

Dear reader – knocked about is a paltry term for what fell on us. Major wave action with more breaking into the cockpit, winds gusting up to gale force and actually this little picnic overnighter was turning into a major voyage (so much for complacency- sigh).

We did eventually get into Admiralty Bay, but both of us were exhausted because we’d had no sleep at all. We finally dropped anchor in Admiralty Bay, just ahead of Pepper (our English friends Phil and Hattie). It took 3 tries before we could get our Mantus to bite and stay.  By this time we were only thinking of one thing – our bunk, but we did the right thing – we dove our anchor to make sure it was biting and sitting hard – it was.

Later, when we got up and were having some breakfast, we looked back at Pepper.  Was she drifting?  It seemed like she was further back than she had been when we anchored.  Every time we looked it seemed like she was just a little bit further back. We had just decided that we should get the dinghy and check it out when Phil and Hattie came by in their dinghy – they had been ashore.

Shortly thereafter, Pepper upped anchor and sailed further in and took a mooring ball.  Phil later told us that she had drifted around 60 meters. Others apparently had the same problem as several upped their hook and moved to a mooring buoy.

Capri’s anchor down and holding

So how was our New Year’s eve?  Vinni and I stayed on the boat and had dinner, after some wine we were so tired that we went to bed at 8:30, setting the alarm for 11:45.  We got up and watched the fireworks (at least we did that), and went back to bed at about 1:00.  We were completely knackered.

Bequia is a pretty island. The name, Bequia is an old indian word for Island of Flowers.  We walked around most of it. Our first walk went off to a turtle sanctuary where they are trying to save the Hawkbill turtle and it seems to be working. We got picked up by a nice English woman who has lived here for 25 years, Nicola, who told us a lot of the local history etc.

We dove our anchor every morning while on Bequia. We go for a morning swim every morning so we simply take our snorkels and swim out to the anchor and dive. It looked perfect every day.

The third night we were on Bequia the really picked up and by the time we went to bed, Capri was being pushed around by the gusts. At around 2 in the morning we woke to hearing things crashing about in the salon and Capri lying on her beam heeled way over. The wind was howling.  We have no idea how hard we got hit, but it takes a lot to put Capri on her beam.  We think the gust was over 40 knots.

We got everything picked up, books etc. Fortunately nothing broke. Then we went nervously to bed.  We looked to see if Capri was drifting but it seemed she wasn’t – so there was nothing we could do until morning.

Shortly thereafter we awoke to yelling and saw that our neighboring boat, a Spanish boat had drifted. Talking with them later they said that their anchor had also fouled and they had to cast it adrift. That meant they spent an hour trying to hook a mooring buoy before they finally caught one.

A nasty way to spend a night and not one I hope we ever experience.

The next morning we dove our anchor again – it appeared to have moved about 30 centimeters before digging in even deeper.

In Mantus we trust.

Two mornings later, a huge Superyacht that was on a mooring ball next to us suddenly looked like it was much further away and I could see it was drifting.  I could also see it still had the mooring ball tied onto its line.  I called on the VHF:

“L’albatross, L’albatross this is Capri, Capri – are you aware you are drifting?”

I got a quick response, “yes thank you, we just noticed and are starting our engines”.

People who know say you should never trust mooring balls here in the Caribbean – and that just proved it to us.  We’ll stick with our Mantus.

We explored the island every day – even on my birthday, Vinni forced me to walk several miles, but it is a beautiful island with tons of beaches.

Local beach with locals enjoying their Sunday after chruch 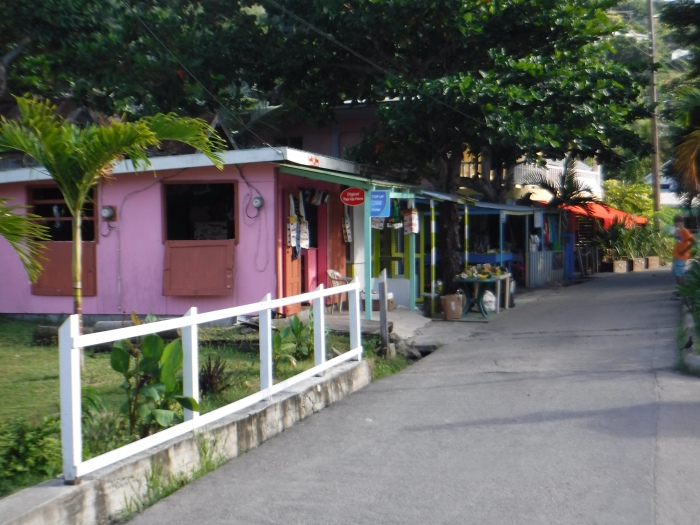 There are goats everywhere and traffic just moves around them

If we thought St. Lucia was expensive – well here everything is even more expensive – much more.

Water costs – wait for it – 50 ECD cents per liter.  At 50 liters per day (we use that now that we shower a couple fo times per day) then our water maker is paid off after about 1 ½ years. Not counting the fact that you can sell it for about 2/3 the new price when you get home.

Further south – in the grenadines – water costs even more.  And you have to buy it because you can’t just wait for at squall to come in – last squall we had was 5 days ago, in the middle of the night and it was brief, so allow 5-10 minutes for the rain to wash the salt etc. off your sail and boom and you’ll get no water because the squall will have passed.  Also not possible to just say  “well lug your jerry cans off into the interior of the island and fill them from a stream/waterfall there” .  Guess what there are no streams or waterfalls. Most of these islands collect their rainfall – there is no indigenous water.  Even on St Lucia where there are streams etc, the water is expensive and costs.

So the expense of a watermaker is vindicated purely on economic grounds, not to mention the comfort of being able to use as much water as we want without having to ration (believe me – that is a comfort, other boats without a watermaker ration their water every day – we use water as we please.

But the meatman who comes by once a week was ok in terms of pricing.  Everything, no matter what kind of meat, costs 9 EC ($1.80 US) per pound.  We bought a couple of steaks which were ok – not the best we’ve ever had, but far from the worst. Also several pounds of chili meat and some bacon. So our meat locker is now filled.

Since I get to rant all I want on this website, here’s a rant against credit card captains.  Who are  credit card captains?  These are the guys who fly in, rent a boat (usually a catamaran) and think they can sail (when they can’t).  Many of them have only sailed small boats on a lake or else they’ve only been part of a crew on a bigger boat once or twice. They sail into the anchorage and despite there being umpteen miles of empty water around, insist on dumping their anchor directly on top of ours, letting out a bit of chain and then when their boat is only a few meters away, they jump in their dinghies and go ashore.  They make no effort to insure their anchor has bitten, not do they care if they have anchored right on top of our anchor (I’ve yelled at a couple of them to not drop anchor where they wanted). And why do they feel the need to be 20 feet away? One of the joys of anchoring is being alone and having privacy. They also never set their day signal anchoring ball and many also don’t turn on their anchoring light at night.

In general they are idiots.

Ok enough of my rant.

A strange thing (for us) is that many also don’t fly their national flag or else the flag is so small as to be unnoticeable.  Our Danish flag is big and our harbor/anchoring flag is huge. We do see a lot of Canadians and Germans, Swedes Norwegians and Danes, but very, very few Americans.  Not sure we understand that since the Caribbean is supposed to be an American playground.  Someone said it was because they were afraid of terrorism and piracy.  That would seem a bit far out to us – but maybe it is true.

Here are a few more pics from this tropical paradise – but if we thought this was paradise – we would find the true paradise on the next islands and in the Tabago Cays (see next episode).

When it rains, it pours – the roadside ditches here are big enough to swallow your whole car 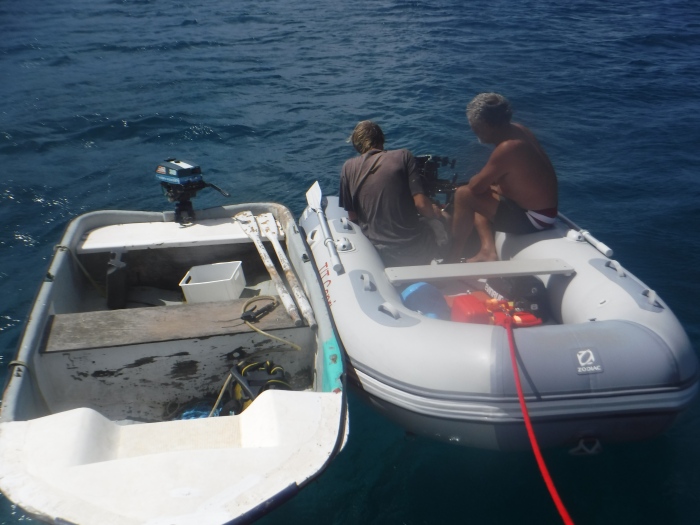 Our dinghy motor crapped out and fellow dane, Mads helped me to get it running again