We left Liberty Marina early, in order to catch the rising tide and get a free ride up the river. It is really interesting watching New York wake up

Oh yeah – I forgot – New York the city that never sleeps.  Well, some of the city was sleeping and woke up.

We passed under the George Washington Bridge and whaddaya know – there is a small red lighthouse, right there at the base of one of the towering pylons. 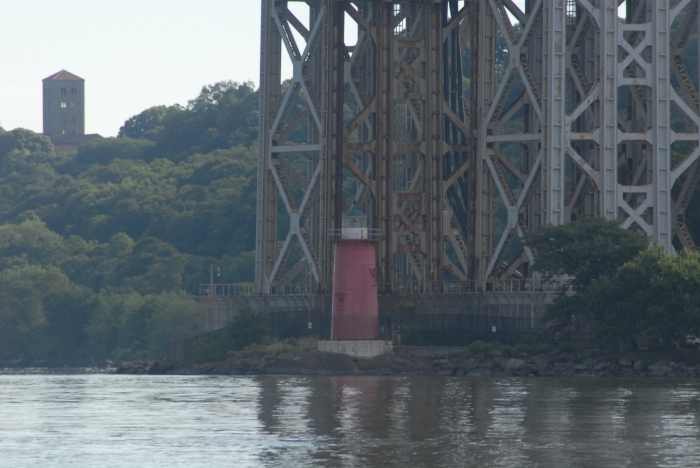 The little red lighthouse and the Great Grey Bridge

Actually, the lighthouse was scheduled for destruction. The children’s story raised a public outcry and the city decided to leave the lighthouse where it was, now it is a historic site.

We passed by on our way north, leaving Manhattan behind. Shortly after leaving the city behind, we were stopped by the Westchester County water cops. Here we were,  going upriver, flying a foreign flag. Absolutely suspicious, especially since we were also broadcasting both our position, our name and our flag on the AIS, so anyone within 30 nautical miles could follow us. 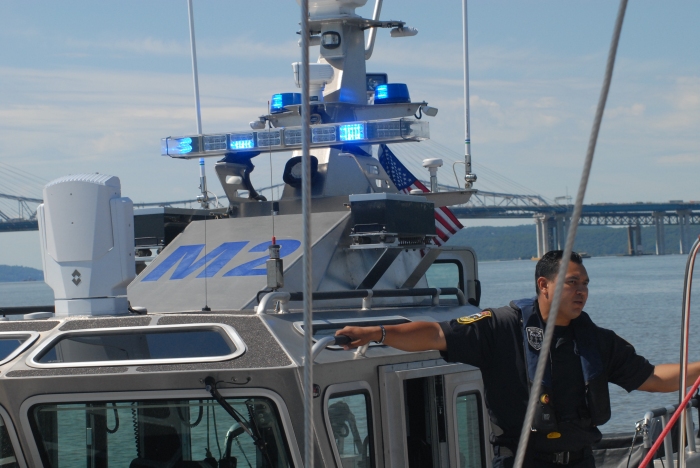 Stopped by the cops

But they were nice enough – just checking our cruising license and visas. They didn’t bother doing a safety check since, as the one officer put it, “all you guys in ocean going sailboats have more safety equipment on board than I know of.”  After a few minutes, we were on our way.  Only to be stopped an hour later by the Rockland County police.  When I told on the VHF that we had just been stopped by the Westchester County guys and I also could give them the officers badge number, they decided to leave us alone.

We made it up to Newburgh where we tied up for the night (there aren’t very many places to anchor out on the Hudson). The next day we took a taxi a few miles downriver to visit West Point, the US army military academy. It is interesting and you can feel the “long grey line” of officers stretching back to the 1780 when it was first established. Touring the cemetery was really interesting – some of those generals etc had monumental egos – easily seen when you look at their gravestones.

West Point is also the narrowest point in the Hudson and the river makes “S” turn here. The revolutionary army stretched a chain across the river, denying the British the opportunity to sail the Hudson from N Y to Albany. George Washington is quoted as having said that the Hudson is “the key to the continent”. That might be difficult to understand today, but when looked at in his day and age it is right.  The new world started in Boston and ended in Philadelphia. The Hudson cleanly cuts this in half. Control the Hudson and you control the new world. Almost half of the battles fought in the revolution were on the banks of the Hudson. 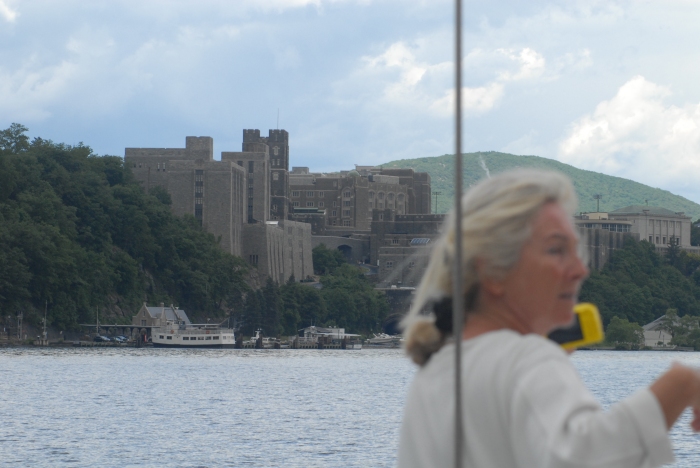 The Hudson River valley is also home to Washinton Irving, the first American writer who could actually earn a living at writing fiction. Rip van Winkel and the legend of Sleepy Hollow are classics that I remember having to read when I went to school.

The valley here is beautiful, with sloping hillsides. Somehow the authorities have managed to keep the hillsides from being built up with houses every few feet.  There are some, notably houses belonging to Roosevelt, Vanderbilt, Astor and Rockefeller, plus some others, but not many. The tide carries us north, moving us with almost 3 knots.

yes there are waterfalls along here

We stopped at Hyde Park, which some of you will undoubtedly remember is the birthplace of Franklin Delano Roosevelt, where we visited his house and museum. This was fascinating. I thought I knew a fair bit about FDR, but nowhere near everything.  Vinni was also fascinated. FDR, and Eleanor, were in many ways, larger than life figures. They certainly were the framers of much of modern day USA, Franklin on the government side with the New Deal and the many infrastructure project he started to get people back to work. Many of those projects, amongst which was the electrification of rural America, have made lasting impression on generations of Americans. Eleanor was perhaps the first feminist who was able to live a feminist agenda –and did.

Statue of Franklin and Eleanor

Vinni and I walk a lot – here at Poughkeepsie there is an old railroad bridge that has been turned into a park – now you can walk across the Hudson. Which we did and then walked around Highlands the small town on the other side – all in all, about 10 miles.

Ya – 10 miles, oh man were our dogs hurting when we got back.  They hurt so much that a tall G&T was called for. But Highlands was an interesting rural American small town.  I’ve lectured Vinni about small town America and I’m really happy she is getting the opportunity to experience it.  So far she’s liked the ones we’ve seen a lot.

The Hudson valley is beautiful and not just because of its physical beauty, but also because of its ever-changing light. I’m not sure why the light here changes as it does, but the Catskill mountain have different shades of color throughout the day. The painters Cole and Church were the founders of what was called the Hudson River School of painting and it was this ever-changing light that drew them here, where they spent their lives painting the valley.

The views here are simply fantastic 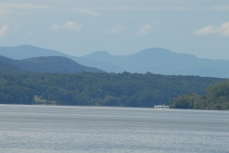 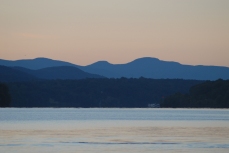 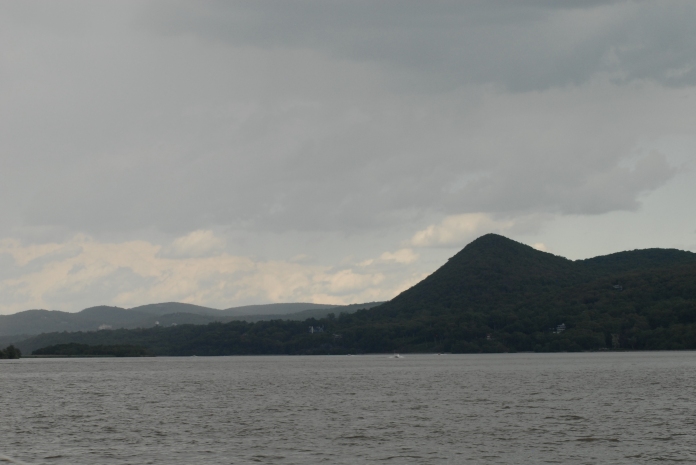 Vinni is enchanted by the view we have of the Catskills and can spend the evenings just looking at them. They ARE beautiful, and it is easy to get lost in the hues.  We can only imagine what this must be like in the autumn when the trees change colors. Cole, especially was fascinated by n the autumn colors and painted many pictures of the hillsides.

We left Hyde Park and sailed north. This being the Hudson, it is all motorsailing. The early settlers sailed this river using sails, but that would be a lot of hard work and if both the wind and the current is against you – you’ll end up going nowhere despite having worked a full day.

We will only go as far north as Catskill Creek – beyond that is Albany, but there really isn’t anything there for us.  WE can’t go any further north without taking down our mast. But if we took our mast down, we could ride the canals and end up in Lake Erie and sail from there either into the Great Lakes or out through the St. Lawrence Seaway to the Atlantic.

All along the Hudson, we pass the old lighthouses and these are really lighthouses. Look at these pictures – they beautiful and reminders of a time past. If you have a lot of money and are willing to spend a year on the waiting list – you can stay at the Saugraties Lighthouse. It is a B&B, but the waiting list is loooooong.

These lighthouses are right out of a history book

We sailed up Catskill Creek to the marina. Some of the docks were completely twisted and destroyed and when we asked we were told it was the ice the past winter. We’re talking steel I-beams 50cm thick.  Man – powerful ice……………………

We spent some days here – visiting the Cole house and museum and seeing some of the paintings of the Hudson. He was talented and made the valley come alive. He lived here before the civil war and decried the “progress” that was happening. The railroad came through and the forests were cut down to make way for farming. Several of his paintings reflect that.

One afternoon a seaplane came chugging up the river (see video). Not a sight you see every day. The dockmaster told us the pilot lived on the other side of the river, but kept his boat in the marina. So whenever he was flying, he would come over and check on his boat before going home in the plane.

Intown, we came across numerous statues of cats, decorated  and painted, each one unique. Turns out that every year, the local businesses sponsor a “cat”, meaning they buy the statue and pay a local artist $500 to paint/decorate it as they see fit.  The cats are then on display around town all summer and in the fall,  they are auctioned off to highest bidder. Some of these are truly ingenious. None go for less than $500 at auction and we were told that the highest bid for one was $11,500.  These are truly art.  All the proceeds of the auction then go to local charity.

How’s that for a win/win situation?

We finally left the Catskills and started south, arriving at Hyde Park in time for the Fourth of July and the major fireworks display that is put on there. Very pretty. 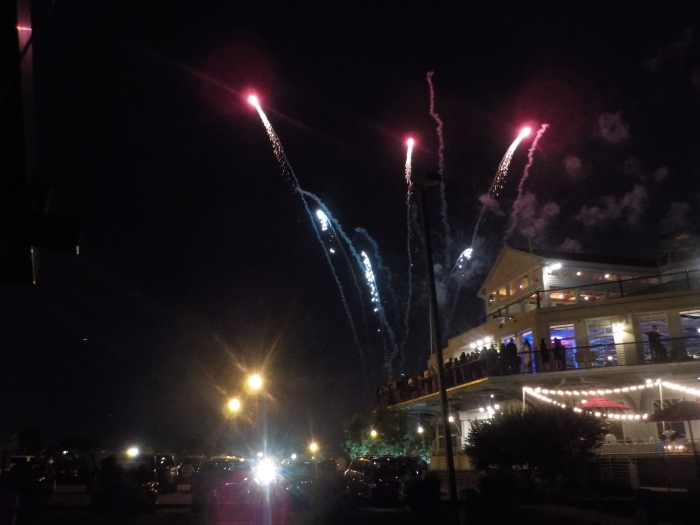 we had a front row seat

We’ll also rent a car and drive over to Rhode Island. We have some visa issues (sigh) which we need to get sorted out and hopefully that will be a sympathetic immigration officer over there.