We stayed in Vigo a few days while we waited for some spare parts to be delivered. Once it became obvious that the delivery would take several days we decided we’d sail out to Isla de Ceis, a couple of islands about 12 nautical miles away at the mouth of the bay.

Isla de Ceis is very popular, a fact that was attested to by the many boats that ferried Spanish tourists out there in the morning and back again in the evening. We’d also heard from other sailors that the islands were well worth a visit and there were some excellent anchoring spots in the bay behind the main island.

Definitely a plan, so we sailed mid-morning and reached the island around lunchtime. It took a while to get our anchor ready since it was still tied down from our Biscay crossing, but eventually it was ready and our Mantus slid quietly down to the bottom in 10 meters of water. The weather report had said we would get heavy winds while we were here so we laid out 60 meters of chain. The anchor bit right away and held like it was nailed to the bottom.

Lying at anchor is wonderful. The world is a peace and the neighbors are far enough away that they don’t disturb you. We anchored a bit out from the beach while the others were a fair bit closer. We didn’t want to cross anchor lines with them when the wind changed direction (which was forecast).

The first night we slept like babies. Capri rocked lightly with the waves. Later the waves got bigger as the tide went out.  Apparently, the ebbing tide runs into the islands and casts back heavy swell. But we got used to it and it didn’t disturb our sleep (not much does!). The morning was utterly beautiful. I baked some rolls and we breakfasted in the cockpit in the morning sun.

The island lay waiting to be explored, so we unpacked the dinghy and pumped it up (this on the deck where there isn’t much room to start with – ha, ha, ha). Then hoist it up in a halyard, over the side and into the water and we’re ready to go.

A dinghy is not the easiest boat in the world to row. The oars aren’t particularly good and the dinghy has a tendency to spin around itself if you pull too hard on one oar or the other. In other words – it’s a piece of shit.

But after I whipped Vinni’s naked back with the cat-o-nine tails a half dozen times she got motivated and got the hang of rowing a dinghy.

Huh? Is Carsten having delusions? He whipped Vinni’s back with a cat-o-nine tails? Perhaps it was the other way around?

No dear friends – that was a bit of poetic license. No cat was used. I rowed and Vinni gave me verbal encouragement and after a while we got it right and could head in toward the beach. Everything went well until we got to the surf. Vinni hopped out, but her bikini got stuck on an oarlock. I let go of the oars to get her released and a big wave hit us from behind. I did a perfect double somersault with a half-twist and a gainer over the back end of the dinghy and into the water.

The judges on the beach gave me straight 9’s for technique and a mix of 8’s and 9’s for artistic impression.

There we were, no medals, and dripping wet. Fortunately the only thing that was hurt was our pride (and it was plenty hurt). Good thing we have a sense of humor. We dragged the dinghy up the beach and tied it to fence post and now we were ready to go exploring. There is a campground on the island, which means there is also a small market, a restaurant and, of course, a beach bar.

Aside from that there really isn’t much except a beautiful beach, rocks and cliffs and a lighthouse all the way up on top of the small mountain. Climbing up to the lighthouse seemed to be obligatory – so we did. The trip is about a mile and half long and not particularly strenuous, but it is hot in the sun. The view is exceptional.

A few hours later, we returned to the beach. We were on the verge of dying of thirst (not for water – we had plenty of that with us). Obviously our bodies were dehydrated and we rehydrated them with a cold draft beer at the beach bar. The first one tasted like it needed at least a second one as a chaser, but we manfully (and womanfully in these equality times), showed our character and drank only one (We have lots of cold beer on Capri J ).

So we rowed back out an later I grilled and we ate dinner under the stars.

Dear friends – this life as a cruiser is unbearably tough, on the body as well as the soul………………..

The wind gained strength during the night getting up to 25 knots and that meant our anchor was going to be tested. Not only did the wind get up, but during the night it changed direction, which meant our anchor would have to release the bottom and reset itself while we slept (we hoped this is what would happen – otherwise Capri would be on the rocks). The winds was just over 25 knots when we crawled under our down comforter.

We awoke to no wind at all. Completely calm. Our chartplotter could tell us that the boat had moved in a half circle but our anchor had stayed put.

It’s good to know you can trust your anchor.

Back to Vigo to pick up our spare parts and get ready to sail to Porto. First a quick trip by the local chandler where Vinni spotted some “crocs” shoes she has been looking for. Unfortunately, the store only had them in olive-drab in her size. She bought them, but only after she bargained them down 1 euro because of the color. The storekeeper kept telling her she was making a “daring fashion statement” with that color shoe – but for some reason Vinni didn’t quite see it that way .

Vinni makes a “daring fashion statement” shocking all the other women……

The weather here is weird. There is a phenomenon known as the “Portuguese trade winds”, that blow down along the coast. We knew that, but didn’t know that it blows right up to gale strength. There was a window the next morning where it wasn’t supposed to blow more than 10 knots so Vinni and I slipped our lines in the dark and sailed out.

We ended up sailing the whole way on radar. We couldn’t see shit (as the popular expression goes) around the boat. We could see the coastline (only 2nm away) and we couldn’t see any of the fishing buoys until we ran them down. Shit, shit, shit! 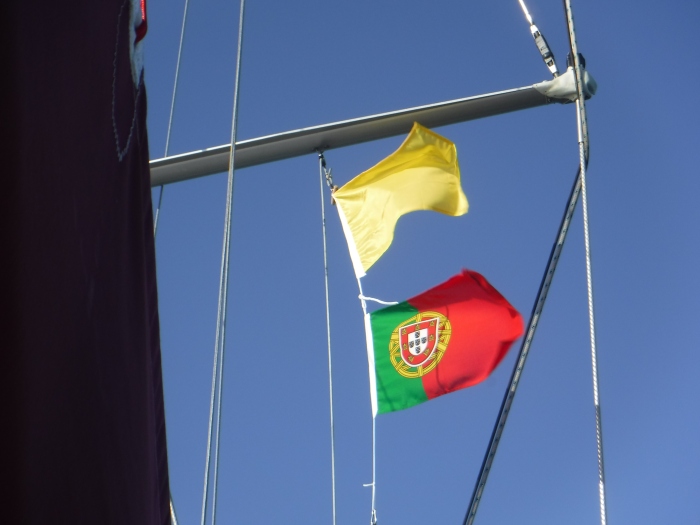 Finally, at late afternoon, when we were 8-10 nm from Leixoes, our harbor for the night,  the fog lifted and we could see around us. We decided to lay to in Leixoes rather than sail up the Duro river into Porto proper. It is rather expensive to harbor in Porto itself, the river is tricky navigation and finally we had heard that it is a half hour walk from the marina to the city center. There’s a metro that goes from Leixoes every 10 minutes and takes 35 minutes to the city center. So better to stay out here.

We’ve been here a couple of days now, while I worked on a few problems with the boat (our wailing wall is never empty). Yesterday we spent the day in Porto walking around and getting a feel for the city – which by the way is beautiful.

There is a weather window day after tomorrow – so we’ll probably sail to Cascais (Lisbon).

Here are some typical street pictures from Porto

A nunnery in the middle of the old town 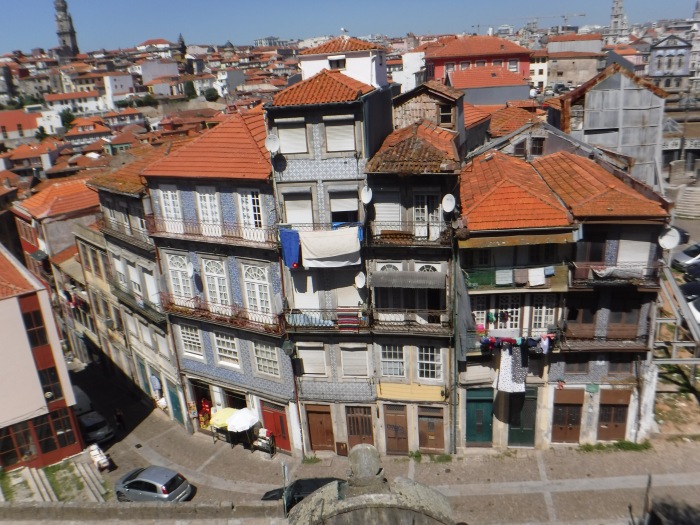 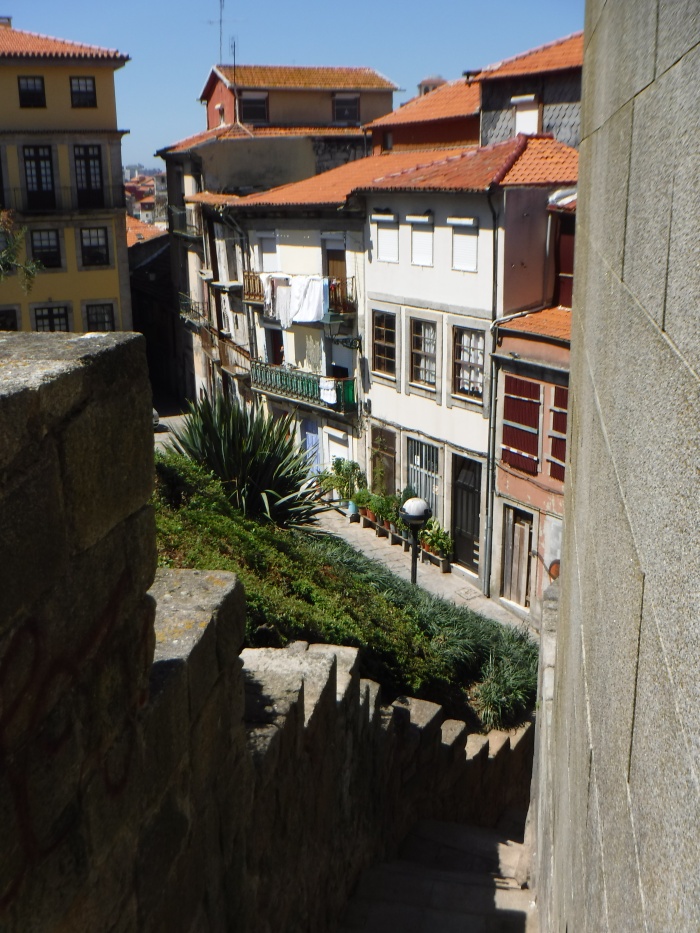 old part of the city, by the cathedral

drying clothes and old women checking out the street – archtypical