We left Troon for Ireland after having studied both the weather forecast and the tides. The weather forecast noted that we should have a mixture of wind – the first 1/3 of the 195 nautical mile trip we’d have the wind in our faces (typical vinni and carsten weather) but then the wind would veer (clockwise around the compass) and we have either a broad reach or the wind from aft.  So, all in all, not too bad, we’d have to tack the few hours and then we could relax and have the wind from the stern and smooth sailing all the way to Dublin.

Speaking of the wind, the weather forecasts all said 8-10 knots with occasional periods of 12 knot winds. For those of you who are faithful readers of these writings from my hand (aren’t you all faithful?), you’ll remember that all our sailing friends(with friends like these who needs enemies?) say that Vinni and Carsten always sail up wind and generally end up in absolutely nasty, nasty sailing conditions).

How shall I explain?

OK, we started out just fine, the weather forecast was spot on. Wind in our faces, but not very strong so we cheerfully tacked down the firth of clyde, taking long tacks and generally enjoying the weather, which, although cold as all get out, was not terribly unpleasant.

Soon, however, the wind picked up and the cloud cover got heavier and heavier. The forecast had not said anything about rain. Or at least it had only mentioned that there was a chance for a light drizzle. We were going to be enlightened about the reliability of weather forecasts.

For some reason, we actually expected that, having checked three independent weather sources who all agreed, the forecast was reasonably accurate.

Capri pounding waves in the Firth of Clyde

But, this was still Scotland and in Scotland it rains, unless it is snowing (to quote our new Scottish friend Alasdair). It didn’t snow (gotcha there didn’t I?). Rain, however, was another matter. Soon the clouds had dropped so far down that they became one with the sea.

Vinni was sleeping and I was on watch. I could see the front end of the boat but I’m not sure how much further I could see. This meant that I had to stand and keep a constant look-out.

In the pouring rain.

In the pouring rain.

Aah the joy of standing in a heavy rain with the wind hard on your face. With a freezing wind, mind you.

This type of sailing squeezes all the energy out of you. The constant attention of keeping a look-out, coupled with minding the sails and trying desperately to keep warm sucks you dry. I should mention here that I was dressed in a long sleeved heavy polo shirt, a very thick fleece with a high collar and my foulies. I also was wearing jeans and my foulies pants with bib and everything else. A knitted woolen cap and heavy fleece gloves and still I was freezing.

Did someone say “High Lat sailing”?’

Well hell, you say (I’m surrounded by friends) it wasn’t going to get worse, was it?

Oh it was. Indeed it was.

Because sailing here there is also something known as tidal streams. Which means the tide going in and out, but because of the narrow waters between the islands and isthmuses of Scotland, flow at up to 5-6 knots (or more). Coupled with this are a phenomena known as “overfalls” which happens when you have a high wind blowing in the opposite direction of the tide. This raises really nasty waves, a high chop, so the boat is constantly rising to the top of one very steep wave and then crashing down on the next.

Cheery, cheery dear readers. What it really means is a lot of hard work for the helmsman.

As you can imagine, I was overjoyed when my watch ended and Vinni came up. Perhaps I shouldn’t say “came up”. Dragged herself up was more descriptive. Vinni was seasick.

Seasickness can hit anyone – even the oldest of the old salts can get seasick. Vinni didn’t feel well at all. Actually – she felt like shit to put all this in a language everyone can understand. She needed some time to get acclimated and get control over her seasickness, which meant I spent another ½ hour with her until she felt ok enough to take the watch herself.

I truly felt for her – seasickness it terrible. If you’ve ever tried being really really seasick, you can understand why some persons actually throw themselves overboard, just to try to get it all to stop. Vinni wasn’t at that point, but it was obvious she didn’t feel well at all.

I finally went below and just as I was dropping off to a well deserved lullaby, I heard the cry “all hands. All hands”. Now “All hands” means just that – all hands on deck. Ahh but obviously she couldn’t mean me – I mean I just crawled into this nice warm seabunk and I’m almost asleep and dreaming of tropical islands……………

Dear reader, as you may have guess, on Capri there are only two hands, so if Vinni is at the helm, “all Hands” means the only other person on board has to get up get dressed and go up

Who’s the only other person?

I consider myself to be an articulate man, capable of expressing myself with enough nuances to describe feelings and situation.

But, dear friends – how can I describe the pure joy associated with getting out of a warm bunk and donning your cold, damp foulies and crawling up the companionway into a pitch black night in a downpour to help reef the sails.

Oh the joy! The ecstasy! (if you’re a hard core masochist – this is joyful – if you’re not – this is serious pain).

We clawed our way down the Firth and into the Irish sea. There were two saving graces to this little 31 hour trip.

The dolphins. Dolphins, as I’ve noted before always put you in a good mood. How can you not get happy, watching their antics as they play around, under and about the boat. Look at the video – they’re having fun, fun, fun,

We also got our wind vane to work. A Rube Goldberg contraption to be sure – but it works and now we don’t have to use our electric autopilot. God damn – It works!!!!!!!!

Despite the seasickness and the rain – we did get hungry late in the evening and since amongst my other jobs on board I’m also the head and assistant cook, I went below to see what I could conjure up.

It had been a rough day so I decided we needed something to cheer us up.

For starters I cooked up a fresh lobster which I served with fresh-baked sourdough bread and my (in)famous jalapeno mayonnaise. Diving into our cellar, I found a chilled bottle of Poilly Fume, a wonderful wine from the north hillside of the Loire valley. Poilly Fume is not as well known as the Sancerre whites which are grown on the south side of the valley, but the northern side gets less sun and grapes there are not as sweet as the Sancerres. Slight more tart, the Fume is refreshing.

For the main course I grilled a Chateaubriand(medium rare, of course) and served it with steamed new peas and al dente cooked baby new scottish potatoes.  Chateaubriand, of couse cannot be served without Bernaise sauce and I whipped some up. Our cellar (which is well stocked) also yielded up a bottle of Chateauneuf du Pape (2002) which proved an excellent companion to the beef. We had some Isle of Arran cheeses afterward and finally cherries jubilee. Afterwards we relaxed with a Camus XO cognac and I smoked a cigar.

What we ate was spaghetti with a sauce bolognaise which I had made before we left.  The above menu ws what we dreamed we were having. Nice dream though.

Dublin finally came and not a moment too soon. We docked, ate and then collapsed into the bed. We slept for a solid 12 hours and were still tired. Neither of us could recall a sail that hard. We’ve sailed 31 hours before a number of times and while we were tired after 31 hours, we weren’t totally exhausted like we were when we reached Dublin.

Vinni is proud as a peacock over having crossed the north sea, sailed the Scottish archipelagos and finally having crossed the Irish sea – I mean here we are in Ireland – that’s a long way from Copenhagen. So far we have sailed just over 1200 nautical miles. 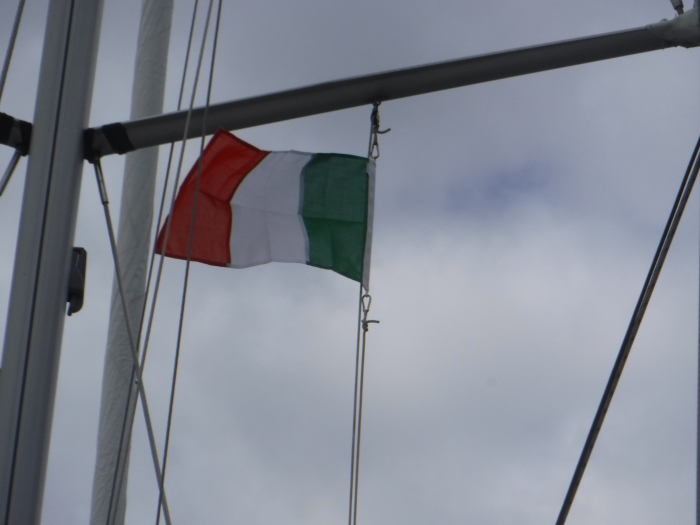 Here in Dublin, I discovered that we have a mouse or perhaps I should say a rat(!) on board. This mouse eats our licorice. As soon as my back is turned – some of the licorice disappears! Patiently I stalked this mouse and finally caught it!  It turned out to have blond hair (now going gray) and be female and about 5 foot 1 inch tall! I caught the mouse going at it with my camera and managed to get a picture! 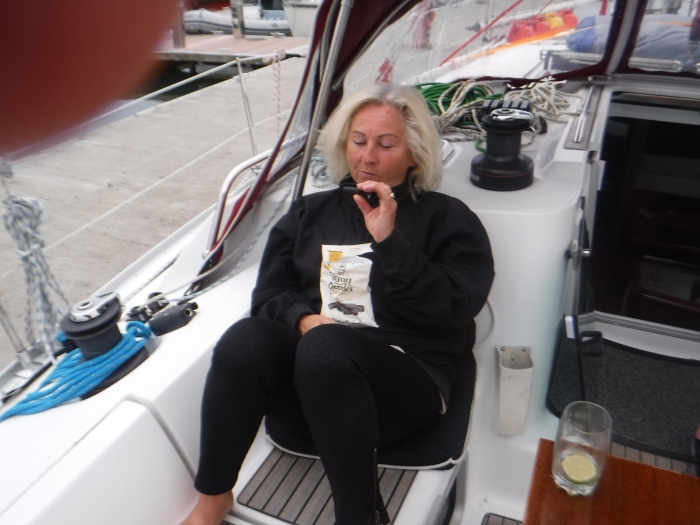 Caught in the act! The licorice mouse, smiling like the cat that ate the canary, prepares to chomp down on another piece of stolen licorice!

And now time for some confessions, dear friends. As some of you know, we hooked up a television antenna on Capri and we do have a TV. But we haven’t hooked up the TV, it was sitting in a box. After 6 weeks of rain and reading books etc, we succumbed and I hooked up the TV and we watched a couple of movies and the news.

The will is strong –but the flesh is weak.  I have packed the damn thing away again.

Another confession – while in Troon we hooked up shore power. Our solar is wonderful and gives us all the electricity we need, but after 6 weeks of heavy overcast, it simply couldn’t cope having to run our water heater.

We didn’t spend much time in Dublin. We wanted to get to Cork because sometimes you end up having to wait a week or more for a decent weather window to cross the Biscay. Most sailors say that the Biscay is as tough a sail as any you can experience, depending on the weather.

Once again Vinni and Carsten proved our friends right. Wind right on the nose the whole way. But it really wasn’t that bad. The winds were generally blowing 10-14 knots with some gusts up to 20 knots. But once again – right on the nose. We made good time, having sailed with the tide and running with a 2 knot tidal stream to carry us along.

Late that night the clouds disappeared for a few hours and Vinni and I were treated to gadzillion stars above. Unbelievably many stars – the sky was white with them.

So here we are in Cork and the wailing wall is full again. Capris wailing wall is the filled with post-it notes of all the things that require fixing or adjusting or, or, or. (sigh).

So here we are and I’ll write more – especially after we have crossed the Biscay. You’ll just have to wait until then to hear if we made it all in one piece