Where were we?  Oh yes, we had spent the night in Peniche (actually 2 nights, but who’s counting?).  Why 2 nights?  If you remember we got caught in an fishing net and had to cut ourselves free and well maybe we just felt a little bit sorry for ourselves and needed a break – so we went out for pizza and beer (good pizza – cold beer – what more can you ask for?).

If, by the way, you think we are tough – take a look at this catamaran – note it is completely open.  The only shelter on this boat is if you crawl (literally!) into one of the small hulls –  otherwise you’re just out there no matter what the weather.  There was a french couple  – almost our ages, sailing this.  Talk about tough – I’ll tip my  hat for them – no way I’d do it. 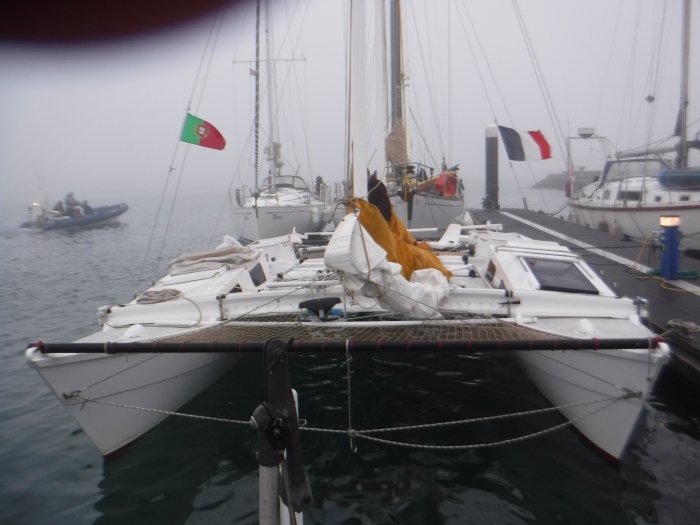 Well off we went into the fog (again!). After a few hours the wind picked up and we were able to set our genua. A few hours later the wind really picked up and now we were flying along with 20-25 knots of wind and Capri was making 7-8 knots.

Christ – this is what sailing I all about (except for the fog, of course).

As the afternoon progressed, the wind kept picking up and picking up. The waves were now breaking all around us and the air was filled with sea spray. The aerometer was showing 33-35 knots and Capri was running 9-9.5 knots

Maybe just a bit too much fun – at 9+ knots – Capri is blasting and even a smallish wave can set her flying in the wrong direction.

But suddenly we rounded the cape by Lisbon bay, the fog disappeared, wind died down and the sun came out.  Cascais  – here we come!

Cascai is a big marina, and expensive.  –the town is actually quite nice and there are gangs of restaurants (of course). We rested up.

Vinni decided I needed a haircut (note she didn’t decide she needed a haircut) <nd she was going to do it. As she dryly noted: “My mother owned a hair salon – so I have it in my genes to cut hair”

Hmmmm – so because my grandfather was a herbalist to the Danish Court – that makes me a herbalist.  Somehow the logic there escaped me.

For the result – look at the video.

We waited in Cascais for a couple of packages and after a week, we bunkered fuel and set off for Madeira.

You can read about that trip in my next episode.