The day finally came when we could slip our lines and set out to sea again.  Vinni and I have been tied to the land much too long now – two months.

To catch up a bit with our plans, we decided to sail directly to the US Virgin Islands, skipping all the other Leeward Islands.  We’ll have to see them when we come down again next season.

Before we left it rained cats and dogs:

we got 6 liters of rainwater in 8 hours!

The run to the USVI is about 360nm so we’re looking at 2 ½ to 3 days – not so far. But it was GREAT to be at sea again, getting some salt water spray in our faces and getting our sealegs back. The weather report said that we would be running on a reach the whole way and there would be lots of squalls and probably some rain during the days.

We got out of Le Main harbor, cut round the corner of Martinique and set our course and sails for the 350 nm run directly to USVI. Off in the distance we could see Guadaloupe as a grey haze that faded from view as the day wore on.  By nightfall we were all alone on the ocean, no other boats, but in the distance we could see the reflections of the lights on the other islands on the clouds above us.

Apparently we managed to sail between the rain showers all day – we could easily spot them both to starboard and to port, but they veered off before hitting us.

The squalls are lining up for the night – we’ll get nailed by them for sure.

Well, whaddaya know – the squalls made detours right around us all night!  The wind picked up a few times and we did get a couple of drops of rain, but by and large, they left us completely alone. Strange to be out here again all alone in the middle of the night. We have both almost forgotten what it is like to stand watch single-handed at night. Late that night, the wind dropped off and Vinni started up the engine so we could motor sail for a few hours.

We’re seeing nothing.  Nada. The sea is empty. Not even any ship on the radar or the AIS. We’re riding on 15 knot winds, making 7 knots speed and hurtling across the waters. The waves are treating us kindly, with most of the swell coming in from the east. Capri is barreling along as if she needs to be somewhere, but the ride is as comfortable as can be. I’m enjoying myself and my coffee.

did someone say “magificent sunset?”

The second night we have just a magnificent sunset (see video), as fine as anything we’ve seen on this trip and it just begs the question, “how damned lucky are we allowed to be? I mean not everyone gets to experience this and here we are, free as a bird, flying across the Caribbean with nary a worry except are we going to get hit by the squalls (small worry actually)”.

King Neptune (or Poseidon if you like) has decided to be extremely kind to we two poor souls. Again this night he sends a multitude of squalls in our directions, but detours them right around us. We spend our watches seeing the squalls go by and not having to touch the sails or our course and Capri just keeps rolling out the miles. Dawn breaks and we see rain clouds right in our path in front.

Oh well – you can’t stay lucky all the time, I guess. Yet as we close in the clouds, a chasm magically appears right on our course. It’s raining to starboard. It’s raining to port. But here on Capri – all is dry and the sun is shining.

Yes indeed. Neptune held his hand over us on this trip. Late afternoon, we spot St. Croix ahead and decide to make for Christiansted instead of Charlotte Amalie on St. Thomas.   It’s coming up on the weekend and we need to clear in. This time we will be clearing in to the US and that can take a fair amount of time.

We run along the northern side of St. Croix, between it and a smaller island named Buck Island. The beaches have to be seen to be believed – the purest white sand with almost no waves, azure water so clear that the bottom is visible 15 meters (50 feet) down. The islands look rich and plush with thick green foliage and lots of palm trees.

Did someone say paradise?

We anchored in Christiansted harbor right beneath the guns of the fortress Christiansværn. This fortress was built at the same time as our townhouse in Copenhagen, the early 1700’s and the styles are very similar.

Hook down, I call the Border Protection people and say that we’re in, but we can’t make it to their offices before they close, because we have to inflate our dinghy first. I also ask if it would be OK for us to go into town and have dinner without clearing in until tomorrow.

So here’s the big surprise. First the officer I talked to on the phone said it would not be a problem if we landed and went into town and had dinner without having cleared in – just bring our passport in case we got asked. Second – He was going to have a Customs and Border Protection officer come down to the dock and clear us in even though it was past their office ours – so we could just inflate our dinghy and come in, the officer would meet us at the dock in an hour.

Uuuhhh, is this the US Customs and Border Protection talking? Being very service minded and nice?  Hmmm – maybe this is the wrong island, or maybe we sailed into the twilight zone.

To make a short story long, a hour later Inspector Levinski met us at the dock, took us into an office and cleared us in. He also told us that crime is a big, big problem on the USVI’s (which I had read about). He cautioned us not to go further afield that the waterfront and the old section of the town. “Don’t wear any jewelry, no big cameras, no big wallet, don’t flash a lot of money etc etc.”

Hmmm – I knew there was a crime problem – but this is more than I thought.  He also told us that crime on St. Thomas was worse than on St. Croix and we would really need to watch out over there – especially because it was carnival time there.

Hmm – ok, maybe not quite paradise.

But Christiansted was a pretty little town with many buildings from the Danish era. Virtually all of them are on the National list of historic places and therefore come under the protection of the Department of Parks – but like all these departments around the world they desperately lack resources (read: money) and many of the public buildings are in poor condition – and getting worse. Some of the privately owned houses are falling down.

Corny I know – but obligatory – especially when you are Danish

Vinni on the ramparts – Capri in the background

me in the foreground

Fire when ready! Capri under the guns

But we did what all good tourists do – wandered around, looked (and gawked), took pictures and ate out. The next day I donned my dive gear, because we had heard a few strange noises from our propeller, which upon investigation turned out to be massive growths of barnacles on both the prop and the drive shaft. The bottom was clean, however. This had all come from lying in the harbor at Le Main for 2 months. When we left Capri there to go to Denmark – the bottom and the prop were clean as a whistle.  1 ½ hours later, the prop and the shaft were clean and I was back up in the cockpit enjoying a well-earned beer.

We stayed a couple of days in St. Croix, played trivial pursuit at the local bar against the locals who turned up in teams, wearing team t-shirts. These people actually sit at home and read trivial pursuit questions and memorize the answers.

After a couple of G&T we got in the spirit and managed to come in second to last.

Finally we upped anchor and sailed for St. Thomas, mainly to buy provisions since there is a giant supermarket there. Coming into the harbor we were run up by a dinghy filled with waving kids and adults. Turned out that Felecia, a Danish boat that came across in the ARC with us was anchored there and spotted us on the AIS. So here was the welcoming committee.  We both had a coupon for a free night in the harbor (given to us since we came across on the ARC).

We didn’t fit in in the harbor. The harbor was called the Yacht Haven Grande with emphasis on Grande. We were the smallest boats in there and everything, and I do mean everything was much, much bigger than us. 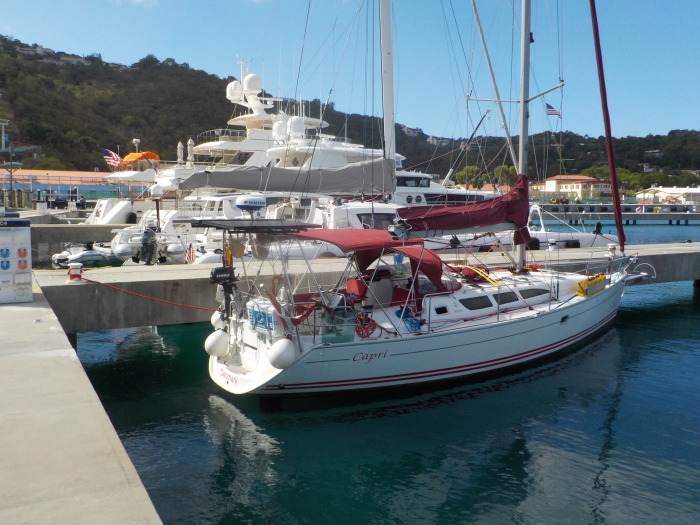 One thought on “Back at sea again – thank god!”