We hauled up our hook and made our way out through the reef from Chichime early in the morning on a course laid for Porto Bello. We had company of two other boas, one a catamaran whose name we didn’t know and the other one a boat named Celebrity who we have seen here in the San Blas a number of times.

Once more Vinni and I showed our prowess as weather gurus (ok – read this as once again we got lucky) and picked a good weather window. NO wind to speak of, but also no swells and no rain – so it was a comfortable sail. It is 53 nautical miles from Chichime to Porto Bello and it took 9 hours to sail it, we dropped our hook late in the afternoon amidst 25-30 other boats.

We were going to dinghy into town, but we were tired and decided to stay on the boat and go in the next morning, Sunday. This was Saturday evening and the town was going full blast. Music was blasted out at volume that made it hard to be in the cockpit having ad rink, much less sleeping later and it kept up all night until 5 a.m. On top of that, water taxis zoomed through the anchorage every few minutes at full speed as they freighted people across the bay from a mini resort on the other side. Sending huge swells across the anchorage.

Irritating to say it mildly.

Ok- our guidebook told us that there is an old Spanish fort here, built in 1760 that is almost perfectly preserved, so early Sunday morning we hopped in the dink and sailed across the bay. The fort is well-preserved, but unfortunately no one takes care of it so getting around on it is difficult with hip high weeds and tumbled down stairs. We gave up trying to get to the upper level, simply because we weren’t wearing heavy hiking boots. 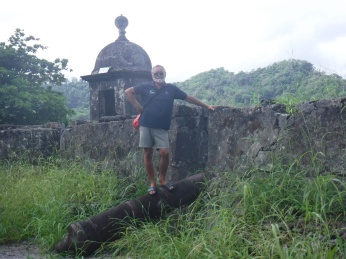 But it was interesting and a reminder of the fact that Porto Bello was he harbor that Spain used to load their treasure galleons and ship their ill-gotten gains back to Spain. Here they loaded the gold, silver and jewels they robbed from the Inca, Mayan and Aztecs when the conquered and raped their cultures. The sheer amount of wealth that passed through here made it natural to build forts here.

The forts didn’t stop the pirates and others from going after the gold. The treasure ships were annual targets for pirates and privateers. Others tried the direct approach, amongst them Henry Morgan who attacked Porto Bello with a force of 460 men, capturing the town and demanding 100,000 pesitas as ransom for not pillaging, raping and killing everyone.

Henry Morgan ended up as a very rich man and became the vice-governor of Jamaica. Additionally he was knighted and became Sir Henry Morgan. Not bad for the son of a welsh serf.

Back to the city. We landed at the dinghy dock of a restaurant (German!). It was Sunday so not much was open. Our first impression was that the town was unbelievably dirty. Litter and garbage everywhere. Even worse than Copenhagen, which has gone from being one of the cleanest cities around to one of the dirtiest. Garbage was strewn everywhere and this was the touristy part of the town. This is where all the tourists come. This is where all the restaurants are. The guidebook told us that the old customs house is well-restored and worth a visit. Our guidebook is a couple of years old and unfortunately, they were busy restoring it so we could go in. Further down the road lies the Church of the Black Christ. The name stems from the Christ figure on the alter which is carved from black wood. According to legend, many miracles have occurred if a person touches the statue. Each year in October there is a major festival celebrating the Black Christ and people come from near and far to pray. The most pious come on their knees and each year there are pilgrims coming all the way from Costa Rico on their knees……………………….

Since it was Sunday, there were services and it is not allowed to photograph in the church nor are short pants allowed (I was wearing shorts), so we stood outside and listened. While there a large group of people gathered and started singing and playing various musical instruments. See the video here.

We also walked through the older section of town, here where the locals live. If possible, this section of town was even dirtier that the tourist part. Everyone here apparently can afford a satellite dish, some can afford two…………………..

There is also an old fort here and a big flock of buzzards.

more buzzards than you could shake a stick at

We walked through the last section of town and were not impressed. We’d been told that the town was a sleepy but nice little town and had a couple of good restaurants.

Neither Vinni nor I are hysterical but after seeing how dirty the town was, we decided that the standard of hygiene in the restaurants was probably lower than we like and went back to the boat to eat. The music went full blast again all day (and all night). Does anyone in this town ever sleep?

We left early the next morning. It was a 5 hour sail and despite some rain, quite enjoyable. We slid into out slip in Shelter Bay Marina early afternoon.

One thought on “Porto Bello”