As dawn breaks, we can see O´ahu’s skyline and the famous Diamond Head.  The air out here on the ocean is clean and clear so we have been able to see Honolulu’s lights from far away.  We’ve reached Honolulu and I guess it is first now that we truly realize we have sailed to Hawaii.

Diamond Head with Honolulu in the background

We’ve managed to get a slip in Hawaii Yacht Club in Ala Wai Harbor.  HYC is a great little yacht club, consisting of only 21 slips and lies between the much larger Ala Wai and Waikiki Yacht Clubs.  It may be small there is a very active club life and they sponsor an extremely active teenagers racing school.  The club has over 500 members, even though it only has the 21 slips.

The view from our slip at Hawaii Yacht Club

Here we have a club restaurant and bar, Friday nights there is a band (usually a very good band).  There is a big common kitchen we can use, two big grill areas and many terraces.  The club also has an extremely well-equipped workshop – a godsend for cruising sailors like us.  The only thing missing is a laundromat, although there is one within walking distance.

Every Monday, there is potluck.  Two potlucks actually.  The members who don’t live on boats here gather around a huge brick grill on one side of the clubhouse.  Those that live on the boats, call themselves Trailer Trash (this group now includes us) and meet at the back of the club.  In other words, the finer class of people that live in town don’t have to associate with boat bums like us.  That’s fine with us – we like consorting with boat bums.

The club has a rule that you can drink your own alcohol on your boat – but on the premises, you have to buy your booze at the bar.  This is so the people running the restaurant and bar can make money.

Fridays, everybody is either racing or sitting in the bar drinking and waiting for the boats to come back in.  The finish line is right in front of the bar.  They stagger the starts so the slow boats go out first and the speedy ones last – meaning that it really is a race in through the channel to the finish line.  The apres-racing party alternates between Hawaii and Waikiki Yacht Clubs.

When the locals heard that we won the first leg of the ARC+ they immediately wanted us to come racing.  Our 40 foot Sun Fast is a direct competitor to a 40 foot Beneteau First that frequently wins.  We’re not racers and don’t understand the rules.  We also wouldn’t stand a chance.  The Beneteau is stripped down for racing, while we are carrying a couple of tons of tools, parts and whatnot.  It wouldn’t be a fair race – or just call us cowards.

We asked if we could crew on the Beneteau and they said “sure”.  I really looked forward to that, especially if I could learn more about trimming sails from these semi-professional racers.  I’m of the opinion that I can always learn more – Carsten doesn’t share this sentiment completely, but dear reader – you are already aware of that.

Friday, we are 18 crew on board Firefly.  Eight in the sailing team and 10 “heavyweights” whose entire job consists of moving from side to side as directed to keep the boat from heeling.  The heavyweights are important – racers don’t reef their sails and all the extra weight on the side helps keep the boat on an even keel.  Unfortunately, there is little wind this day – but on the other hand, we can then learn how they trim sails for light wind racing. 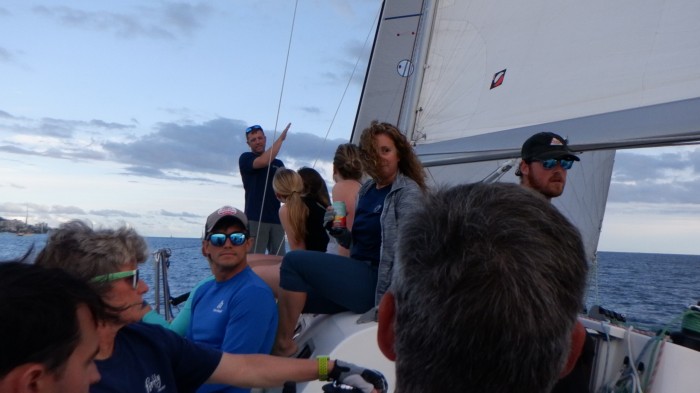 As we close in the finish line, just in front of the clubhouse, we are three boats side by side.  The channel is narrow and we are sailing directly up against the wind.  Travis, our skipper is at the helm, trying to make the most of what wind there is.  All three boats are having to tack up through the channel.  One of the boats is brave and sails outside the channel to tack.  He’s crazy, says Travis – there’s no water out there. 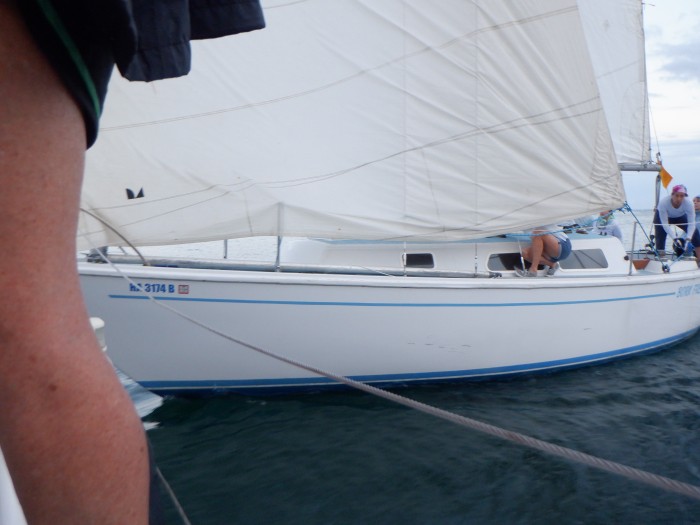 This boat tacked outside the channel

Now Travis yells at the other boat; You have to tack now or I won’t be able to stay in the channel.  Carsten looks at me as I say, in Danish, good thing it isn’t me at the helm and it isn’t Capri he’s yelling at.  Travis is very competent and I’m not nervous until just before the finish line.  All three boats are in a line abreast and there is less than 10 centimeters between them.  I’m waiting for the inevitable crash, as we simply must end up hitting each other.  We’re maybe a few inches ahead of the others when a sudden little gust of wind hits one of the other boats, making him accelerate and he wins, literally “by a nose”.

The winner by a nose

Travis laughs as we are getting off the boat when I tell him I’ve never been that close to another boat.  Apparently, they get even closer than that sometimes.  Firefly was hit and holed a couple of weeks ago when they collided with another racer.  The collision was entirely the other boats fault.  This was the third time that boat hit Firefly and they are now quarantined from racing here.  I’ll never become a racer – I’m not brave enough and besides – I’m a bad loser.

We get a bit excitement in other ways.  I was down in the pantry making dinner when there was a loud knock on our hull.  Steve, the club Commodore came to tell us; the authorities have just issued a Tsunami warning on channel 16.  There’s been an earthquake north of Japan and the first Tsunami waves should hit us around 10 p.m.  It is only a warning as of now, but if you hear the siren, haul in your lines and hurry out of the harbor.  Get out to where the water is at least 4-500 meters deep.  You need to get a couple of nm outside the harbor.  The siren will give you an hours warning.  But you’d better rig your boat for heavy weather already now – it’s stormy out there and the waves are running more than three meters.

That killed our appetite.  WOW, a Tsunami.  Ok – Vinni and Carsten are sailing here.  We started rigging the boat for heavy weather, making sure everything was either stowed or tied down.  We also switched on the VHF so we would follow the updates.  Supposedly, the Tsunamis can be seen on satellite videos so they can tell for sure if we will get hit.  A half hour later, we can hear Steve yell;  The Tsunami warning is cancelled, the quake was only 7.2, not 7.9 on the Richter scale so not big enough to send waves all the way to Hawaii.  The satellite images don’t show any waves either.

One of the locals tells us; the last time we had a Tsunami was in 201.  There were hundreds of boats that sailed out, but it was calm weather with small waves.  We could barely see the Tsunami as it went under us.  It would have been horrible to have to go out last night.  The thought ran through my head – would there even be a marina to sail back into?

So much for that scare – now we could get back to our boat repairs.  Already the first day we were here, we managed to get in touch with a rigger.  The Yacht Club says he is competent so we can trust him.  Out here, you have to be aware of not only “island time” but also “island quality”.  Frequently, anything you get done is very poor quality.

He climbs and finds the same broken thread that we already knew about.  Aside for that, he says, the rig looks fine.  Unfortunately, you can’t see inside the swages, where the fitting is crimped onto the wire.  The only way to find out if there is corrosion there is to slice the swage open – but then you can’t use the wire again.  The rigger says the rig looks good, but when we tell him it is over 14 years old and has almost 30,000 sm on it, he recommends replacing it all.  There is too much of a chance of corrosion inside the swages.

We’d reached the same conclusion ourselves.  We don’t dare sail another 15-20,000 sm with a rig we don’t know if we can trust.  We’ll be heading out into the northern Pacific, one of the worst weather areas in the world.  Most insurance companies insist on rigs being changed every ten years – we’ve been surprised that ours hasn’t forced us to change it.  This decision is expensive – $16,000 (sob).  We can only hope that it will be reflected in Capri’s price when we eventually sell her.

While we are waiting for the new rig, Carsten installs our new autopilot, radar and windex.  That behind us, we take time to play tourist.  We borrow our neighbor’s sexy jeep and manage to visit Pearl Harbor before the Corona virus shuts everything down.

Sexy girl with a sexy car