We’d, via the press, followed the spread of the Corona virus from Wuhan in China.  We hoped that the Chinese would be able to contain it, but it quickly spread to the rest of Asia, then Europe and finally the US and the rest of the world.  A pandemic was started.  Many of our blog readers and family thought that we were safe on an island in the middle of the Pacific – unfortunately that wasn’t true.

The Hawaiian Islands are a major tourist goal for Americans, Canadians and the Japanese, all arriving via cruise ships or airplanes.  There had been no reports of the virus here in the beginning of February – but February is the Chinese New Year and thousands of Chinese arrive to celebrate the New Year with the families.  During this time, we were on Maui, everything was open and Corona was “just something some people talked about”.

We reached Oahu later that month and now Corona was a reality.  Cruise ships were still arriving and all the Japanese were wearing masks (to keep out smog).  A week later, the local populace started wearing masks as the Governor started closing down the state.  Carsten and I tried to buy masks and disinfectant but everything was sold out immediately.  Aside from the local news, we’ve also followed the Danish news and were shocked to read that people in Denmark have been sneaking into hospitals and stealing disinfectants and masks.

A week after Denmark closed down, the Governor closed Hawaii.  He started with a partial lockdown and asking tourists to “stay away”.  Tourism is, by far, the major source of income for this state so asking the tourists to stay away is akin to committing economic suicide.

It is surrealistic to see the empty streets in Honolulu – normally the major arteries are clogged with traffic, even though they are four lanes.  Only the supermarkets and take-out restaurants are open. The world famous Waikiki Beach, which normally looks like flypaper is empty.  A few surfers ply the waves off the beach but otherwise there is no one.  One of the older locals said, Waikiki looks like it did when I was a kid.  Ala Moana Center, a huge mall just across the street from our marina is closed. 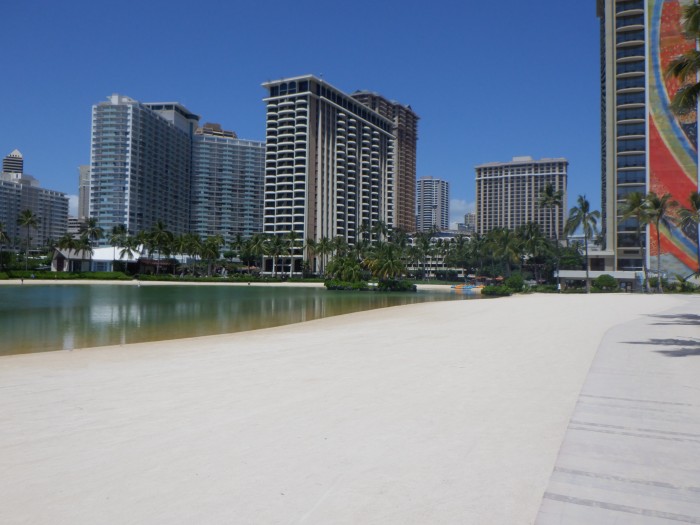 Waikiki Beach empty? Where are all the surf babes and the beach studs?

Capri is Hawaii Yacht Club, in the middle of the city, surrounded by skyscrapers.  Many of them are hotels or time-shares and all are closed.  Honolulu’s skyline, usually brightly lit up, is dark and forbidding.  The skyscrapers stand as mute deserted sentinels along the beach. 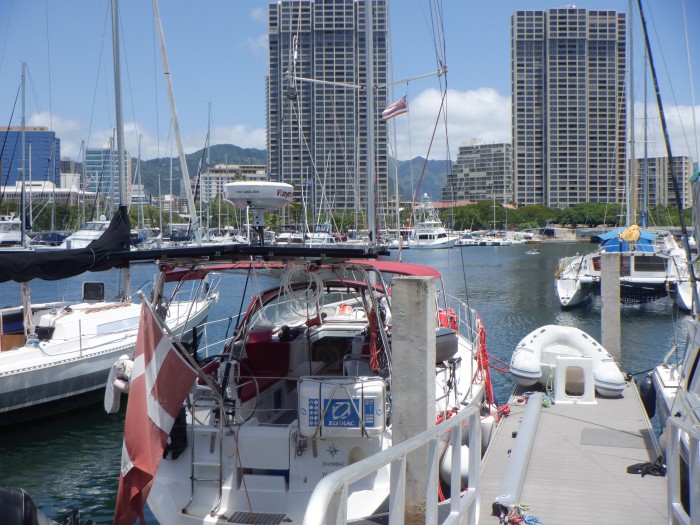 Those skyscrapers on the other side are completely dark

Hawaii Yacht Club is also closed.  The restaurant is closed, the cleaning personnel have been sent home.  So those of us who live here on the boats are cleaning the sailor’s kitchen, the dining room and the toilets and showers.  Members who don’t live on boats here have been asked to stay away – most do although some seem to have difficulty understanding that they can spread the disease by coming here.  Our weekly potluck dinners have been cancelled as well as Friday evening match racing.

So instead of living here in a lively yacht club with a vibrant social life, we are now more or less isolated on board Capri.  We are allowed to go for walks, but we can’t use the parks or the beaches.  The supermarkets are open and we can go shopping, although both toilet paper and paper towels are not to be had anywhere.  Rice, pasta and frozen pizza are all gone.  Some of the supermarkets have decided to cash in and raised prices.

We’re spending our time writing.  Carsten is almost finished with the translation of our first book, Capri – Sailing Distant Seas, to English, and I’m putting the finishing touches on our second book, From the Southern Cross to the North Star.  Boat repairs etc. are on standby.

We also are moonlighting as cleaning personnel – we clean the showers and toilets twice a week.  The Yacht club asked those of us that used the facilities to help out during this crisis and we volunteered to clean the toilets and showers.  Unfortunately, we can see that there are many free-loaders here in the Yacht Club.  We are right alongside Ala Wai Marina, and many of our members have their boats lying there.  They come here every day and use the facilities – but don’t seem to feel they should contribute by helping out.

A Swiss couple on a boat here are cleaning the dining room, but no one else seems to clean anything.  Both they and us have applied to become members (the rates are much cheaper) with effect from when we first arrived.  If the clubs board doesn’t grant us that – then we will stop cleaning.  We are not going to pay full price and also clean the clubhouse.

The Governor isn’t the only one taking this situation seriously, the Mayor of Honolulu has made a video showing how to make our own mask.  Virtually everyone here is wearing a masks now – most of them homemade.  Some even wear them while driving.

We haven’t been able to buy a mask and we don’t have a sewing machine.  Fortunately, one of the neighboring boats has started making masks and we got some from them.

We’ve been in a bit of a quandary – have we had a mild case of Corona?  Carsten had cold/flu symptoms, sore throat and a fever, but no lung infection or difficulty breathing, so we don’t think it was Corona.  A couple of weeks later, I got a fever and a sore throat.  Testing is limited here to those that have breathing difficulty.  So we don’t know if we’ve had a mild case of Corona – if so we can hope we are now immune.

The Governor has sharpened the quarantine rules.  No longer is it voluntary quarantine.  Air travel and all travel between the islands is banned unless you have a very good reason. Cruisers are not allowed to sail between islands.

As this is being written, early May, the state is beginning to open up – we are now allowed to walk in the parks and on the beach.

One thought on “Isolated on Hawaii”