Early rolled around and we had breakfast, got dressed, finished making ready for sea and Vinni took the boat out into a fabulous morning of sunshine and guess what?

In the past I’ve written stories about our sails and trial and tribulations we have experienced, but for the next 3 days we simply sailed. No real waves to speak of, a tailwind the whole way, and the only real issues revolved around – What’s for dinner? Is it my turn to sleep? What’s for dinner? (sailors spend an inordinate amount of time discussing breakfast, lunch and dinner and what possibilities are there?

Bacon and eggs for breakfast

So we talked about hither and yon and what’s for dinner? When we were in the cockpit together (which wasn’t often since sailors also love to sleep). The sunrises and sunsets were phenomenal, fiery reds going over into crimson.

sunsets at sea are pretty unbelievable

Nippy out here at night

Our second morning at about 5 am, I hear Vinni saying

From the cockpit and when I stick my head up she says “dolphins!” and damned if she isn’t right.  A mother and her cub are chasing each other around and under our boat and just having a grand time of it.

Dolphins always put you in a good mood. They always seem to be just plain having fun. These two circled us for 5 or 10 minutes and them moved away. Later I saw the doing the jitterbug 2-300 yards out, jumping and making backwards and forwards somersaults. Finally they came back and this time they brought some friends and there were 5 of them criss-crossing under the boat at breakneck speeds.

What a grand morning.

At some point out there in the middle of the North Sea we crossed the Prime Meridian.  Now everyone makes a big thing about crossing the equator, but crossing the prime meridian is the same thing.  I took a picture as we crossed. 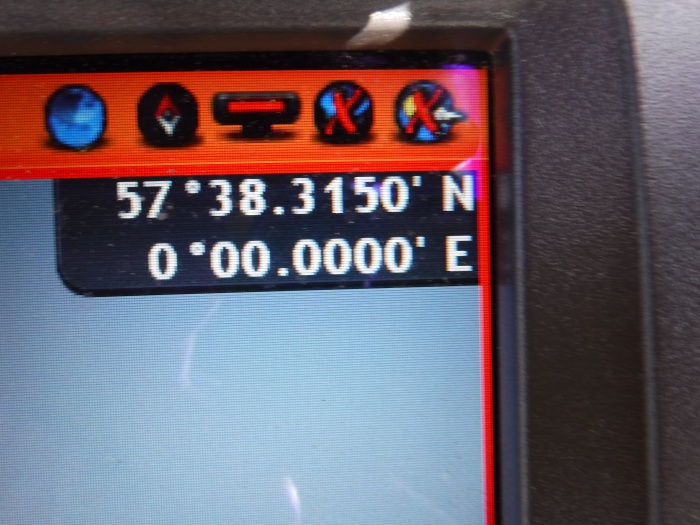 Crossing the Prime Meridian – next we see this – we’ll have circumnavigated the globe………..

59 hours after we left Thyborøn, I could call down to Vinni

Land Ho! As Scotland appeared out of the mist in front of us. 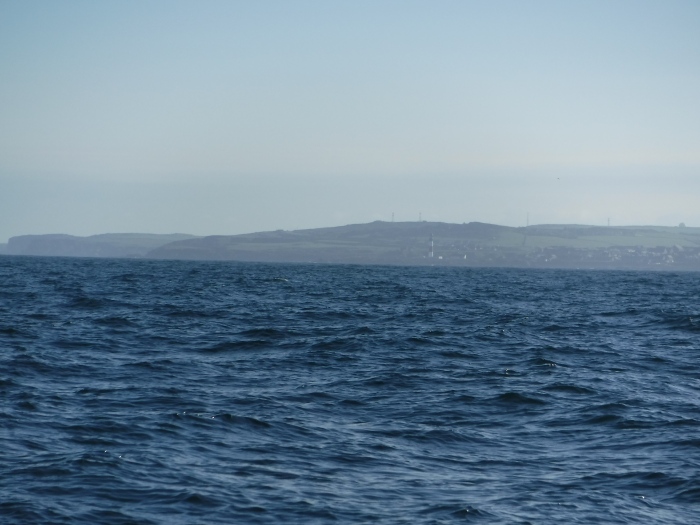 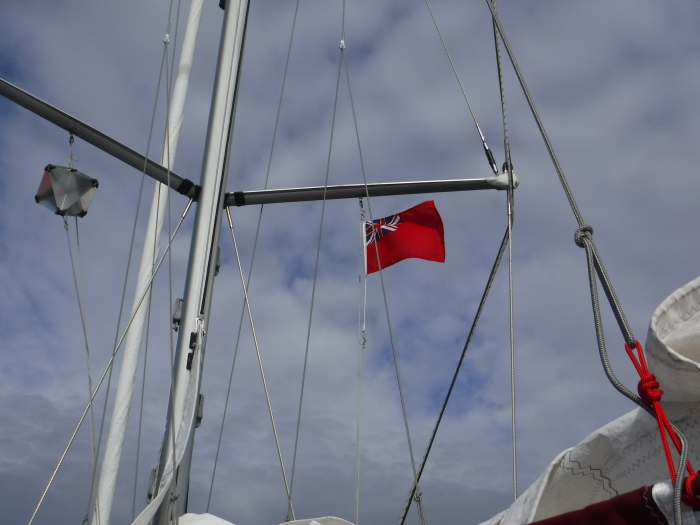 Up goes the courtesy flag – we made it!!

The harbour pilot said we had to call the harbourmaster for permission to enter, which we did and right around 7 pm we docked in Peterhead Bay marina, where Billy, the assistant harbourmaster took our lines and tied us up.

We were tired, and hungry and we quickly made dinner (spaghetti with tomato sauce and lots of it) opened a bottle of champagne to celebrate (tasted damned good), ate, drank some red wine and collapsed into our bed. 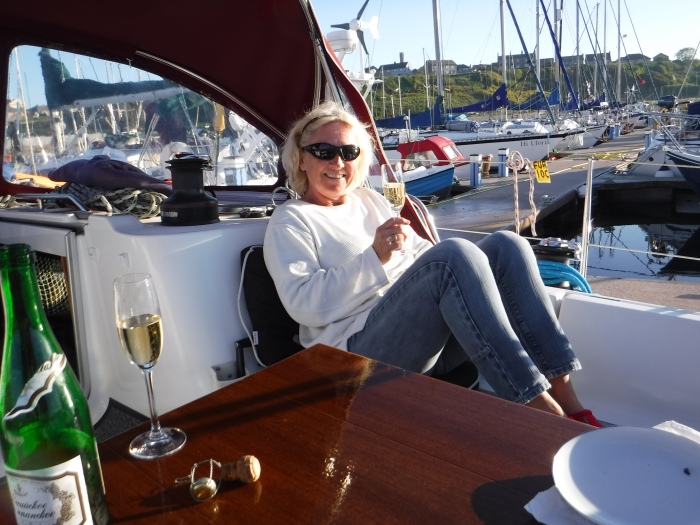 Champagne – and well-deserved it was

We’ve now been wind and rained in here in Peterhead Bay for the past 4 days and we’re sick of it – grey, grey, grey, as my friend Cameron would say – “another soviet shithole”. But it looks like there will be a weather window tomorrow and we’ll bug out for Inverness and the Caledonian Canal. That’s about 18 hours from here.  At the moment we’re baking bread, I gotten our water-maker up and running so we are making 130 liters of fresh water.

But while we’ve been here, we really done nothing but repair boat. Our bow thruster decided to go sick – so that needed repairing. Our water-maker needed adjustment to work. And then a printed circuit board that gives our GPS signal to our VHF and short-wave radios decided to fry.  Naturally such a printed board is no longer manufactured, which meant we had to pull new cabling from our chartplotter to our nav station. While a relatively straightforward task – it piss rained the whole time and took almost all day.  Vinni had climbed down into our lazarette locker to pull the cable through and I heard her cursing like an old salt of a sailor.

Vinni really knows how to curse when it suits her and I can always tell how pissed she is by how many languages she cures in. This was a 3 language pissed off.  And man – then she is really pissed.

Finally our solar decided that it just couldn’t charge the batteries when we were using them to run our hot water heater and everything else – I mean the clouds were right down at the top of our mast and everything was grey – no sun at all. I hooked us up to shore power for a few hours and we were ok.

Today I’m writing and catching up, as is Vinni.

I’ll write more when we are in Inverness

Already at the entrance we could see large, larger, and really large waves crossing.  The forecast said about 2-2 ½ meter waves.  I made them to be about 3 meters but Vinni said:

And who am I to argue? Big were they and Capri stepped right up and took her pounding. We hit some of the waves so hard that they tore the teak right off our bowsprit. Oh well – there goes $400 worth of teak, not counting the work involved.

We took our pounding like good sailors, but both of us felt the beginnings of seasickness. Vinni had taken a seasick pill before we left, as she gets queasy until she gets her “sea-legs”. I’m not prone to seasickness (knock on wood), but even I felt the beginnings in those waves, especially since we hadn’t been at sea for several days.

No namby-pamby here, just right on it and let’s try to make time for Inverness. We left today because the weather forecast gave us this as the only weather window for the next week – so grit your teeth and learn to enjoy it (ha, ha, ha).

As evening came on, I grabbed a couple of hours of sleep while Vinni took the watch. Of course we found out that for some reason our AIS wasn’t working (jubiii!), so we were running on radar and visuals.

Later, when the watch changed, we found out that our new navigational lights systems wasn’t working either (yes isn’t life just dandy – out here in the north sea and you find out what’s not working and what is). The good news was that the weather settled down, but unfortunately the seas stayed high – still those pesky 2 meter waves.

A couple of dolphins dropped by at around 10 pm, played by the boat for a few minutes and then left- guess they were wishing “good night” and a good watch.

Vinni took the dog watch and woke me (much, much too early) so I could have the morning. Surprise, surprise, the weather turned nice, the rollers got smaller and it was just moving right along. We finally closed in on Inverness fjord and now the navigation got more challenging. Lots of shoal water, lots of twists and lots of dolphins and seals and sea lions. Vinni slept while I brought Capri down through the fjord, Scottish mountains lining the way through the mists.

Vinni woke as we closed in on Inverness and the sea lock to the canal. 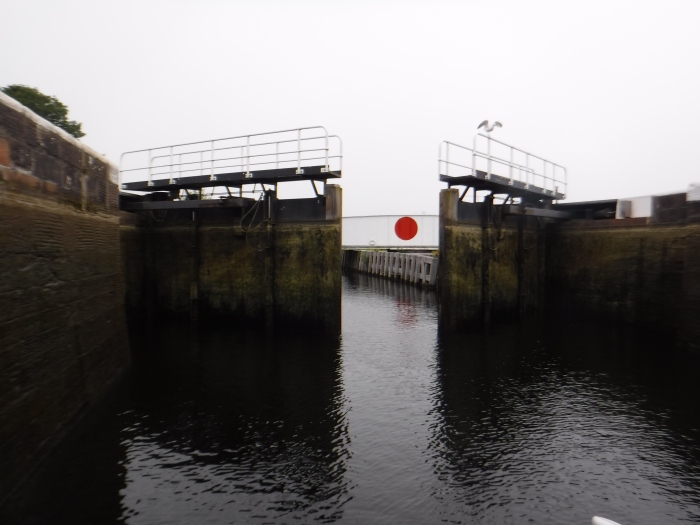 Life goes slowly here in Scotland. The sea-lock is barely obvious and alongside this 200 year old lock is a small white cottage, the lockkeepers office. He’s not in a hurry, got us in the lock, tied us up and then cycled the lock. Thereafter I got to go in and pay (well they are Scottish – nothing free here!) and he spent a lot of time explaining how the canals locks and bridges work, what to do and what to see and finally after 15-20 minutes, let us go.