We’re coming up to end of our ICW adventure. We’ll spend the night at Great Bridge landing which is just before the only lock on the ICW.  So early tomorrow morning, we’ll go under the Great Bridge and through the lock – exiting into the Norfolk river and harbor – and finally into Chesapeake Bay.

Great Bridge has that name form a battle fought during the revolution, where the colonists managed to defeat the British and gain control of Norfolk harbor. This was an important battle and by many historians ranked as one of the battles that helped mark the turning point of the war.  By gaining control of Norfolk, the colonists gained a deep water harbor with access to the Atlantic, allowing them to harass the British ships at sea and thereby disrupt Cornwallis’s supply lines.

But back to the ICW for the last part. We came up the Alligator river canal, where deer and bear live in the woods alongside. This is one of the most sparsely populated areas of the ICW, with mostly woods, marshland and swamp. Lots of tree stumps in the water here and navigation can be difficult.

logs in the river

After the canal, we sailed up the alligator river (yes, there are alligators here – so none of us went swimming) and overnighted in a marina in the middle of nowhere.  Tons of bugs here and nothing else.

We called ahead because the book said the entrance and the harbor had 8 feet. The fellow who answered said, “yeah no problem, we dredged a couple of years ago.”

Well no problem for him I guess, but as we entered our keel started plowing a furrow in the sand at the bottom. I kept giving it more gas and even though we slowed down considerably, we just barely kept moving. Finally I gave it full throttle and we plowed our way through the last of the sand bar at the entrance and into the marina, where, by god, there was 8 feet (most places). 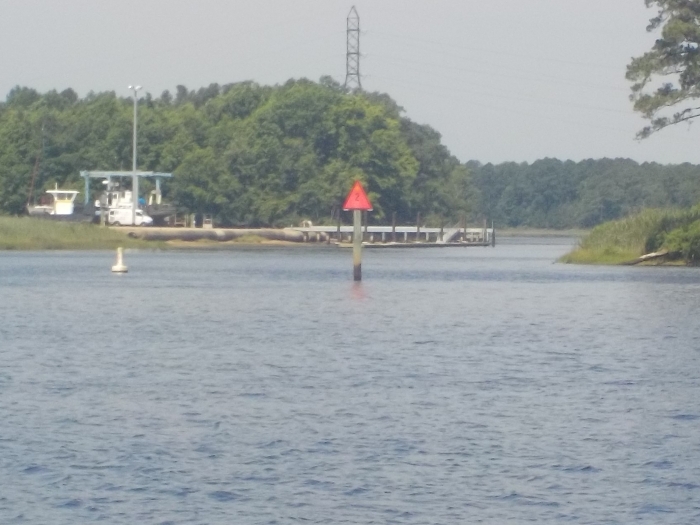 Next morning we bunkered fuel and of course there wasn’t 8 feet by the pumps – more like just over 7 (sigh). But we got diesel and Vinni took us out.

Or rather I guess I should say Vinni plowed her way through the sand bar again – this time Capri leaned over and at full throttle, we just managed to make it out.

That was to be the last of our tribulations, from here on to Norfolk – it was smooth sailing. As we closed on Norfolk, we passed the sign indicating the turn-off to the Great Dismal Swamp route. 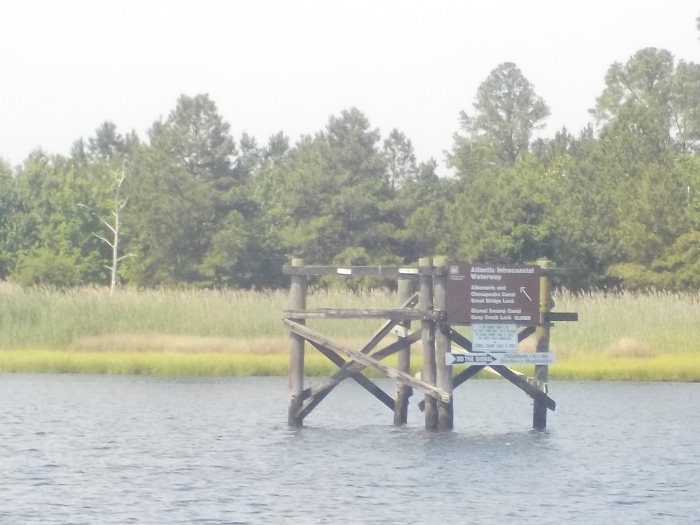 We looked longingly at that sign, wishing we only had a 5 foot keel and a 35 foot mast. That route leads through the Great Dismal Swamp (what a name!) and comes back out into the ICW further south. The Great Dismal Swamp was owned once by George Washington along with some others as an investment – they planned to clear cut the timber there.  Washington eventually pulled out, selling his part to “Lighthorse” Harry Lee, Robert E. Lee’s father.  The timber did end up being cut but the land could not be reclaimed and degenerated into the swamp it is today.  Eventually in the 1950’s, the owners donated it to the government and it is now a park, growing wild.

We would dearly love to sail it – but Capri simply can’t get through there. We’ll never get another chance so I guess we’ll have to say – we’ll do it in our next life (sigh)

We exited into the harbor, under a lifting bridge and past the Norfolk Naval yards. These are huge, on both sides of the river and there are lots of destroyers, cruiser and by god, aircraft carriers.  In the video I said there were 4 – but we ended up counting 8, some under construction and some in for maintenance and overhaul, including the Eisenhower.

There was lots of ship traffic and it was coming from all directions so we were kept busy keeping track of ourselves and others. We had an unusual experience as we closed on the end of Chesapeake Bay.  We were on a collision course (147 meters separation according to our AIS) with a huge merchant ship, called the Ultra Saskatchewan. That’s much too close for our comfort and we called him on the VHF – no answer.

Tried again on the VHF – still no answer.

We tried 5-6 times and he never answered, just as we were prepared to take action to ensure we would be well clear of him, he turned to go upriver. We’ve never experienced a ship not answer our hail. We guess he just didn’t want to bother since he knew he was going to turn and go upriver – but he really should have answered us.

Finally we had an unnerving experience at buoy number 1, marking the entrance to the Chesapeake. I spotted something in the water, asked if anyone could see what it was and got the answer it looked like someone’s beach toy. But I looked again and the more I looked the  more concerned I got. I finally got the binoculars and took a good look.

Life jacket with a person in it

It was a life jacket and there was a person in it.

OH shit! – the person wasn’t moving and that almost certainly meant the this was a floater – meaning we would be pulling a body aboard. I spun the wheel and we motored over and got close.

Yes, it was indeed a life jacket and yes there was a head sticking up and some arms floating out.

We circled and it dawned on us that this was a mannequin with a life jacket on.  It had to be someone’s practice dummy for practicing man overboard. We hailed the Coast Guard on the radio, explained the situation to them and asked what we should do.

I would have thought they would have sent a boat to pick it up – having this thing floating around was going to get a number of people excited if they saw it, but the Coast Guard said we could pick it up and throw it away when we got to port if we wanted, otherwise we should just leave it.  We don’t have room on our deck for a life-sized mannequin in a life jacket so we left it. Sooner or later someone else will see it and get all bothered.

Leaving the mannequin behind – we headed out into the open Atlantic for our run up to New York. This was to be Bente and Lar’s first time ever on the real open ocean and the run will take us about 40 hours.

More about that in the next episode.