We stayed at Hyde Park Marina again on our way back down the Hudson. It was a nice little marina and cheap.  Besides, we were going to the Immigration office in Rhode Island to see if we could get our visa straightened out.  For those who don’t know – you can’t simply go visit an Immigration office – you need an appointment.  Getting an appointment is done on line and I totally screwed up  and got the wrong week – so we rented a car and got ready and when I looked  the appointment was next week

Sheeeeet. Of well – I can always use the excuse that I’m getting old.

Anyway – we had the car, so we decided to go play golf.  I’d ordered the smallest tiniest car Enterprise had, and when I went to pick it up, they said, “sorry, we’re out of small cars, so we’ll upgrade you”.

Upgrade meant going to a huge 4 wheel drive jeep.  What a big mamma!

well hell – not used to this in Denmark

So Vinni and I loaded up the clubs and off we went to The Garrison Golf Club, situated right across from West Point. The drive off the first tee is straight towards West Point and lots of the holes have fantastic views of the river.

Vinni tees off towards West Point. The drive was right down the middle

Garrison’s claim to fame, aside from revolutionary war battles etc. is that the movie “Hello Dolly” was filmed here. You show your age if you can remember the movie.

funny little church alongside the river

Then it was off down the Hudson. We stopped for a pump-out (emptying our balck water tank) in Newbourgh and there on the face pier, were the Nina and the Pinta (replicas).  Lots of people going aboard – but hey, we also crossed the Atlantic so they held no appeal for us. 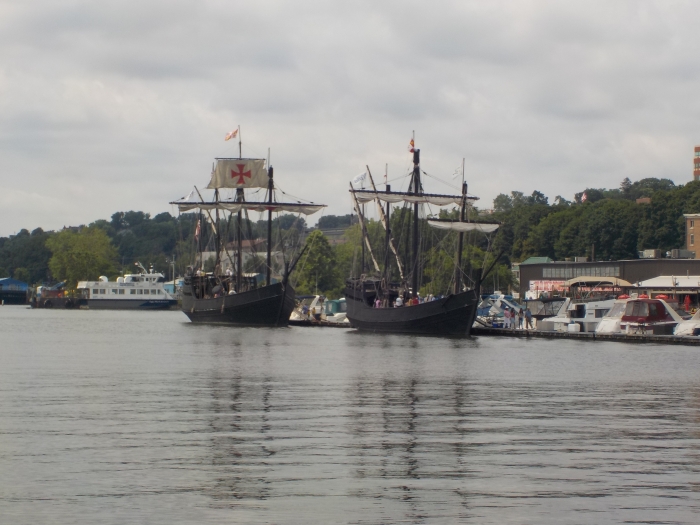 We were going to anchor in Half Moon Bay but the marina there noted in our pilot book (and their own advertisement in the book) that they were a “Deep water” marina, sporting 12 feet of water on the approach and 9 feet of water in the harbor at MLT (mean low tide).  Well, whaddaya know about that? A deep water marina that we can get into without any problems. To top it all off, it was sheltered from the wakes of the passing ships and the waves on the Hudson.

We were tired of being beaten to death by wakes and waves so we decided to spend the money and get a really good night’s sleep. Called ahead and yes, by god, they had an empty slip just waiting for us.  I made sure to tell them that we sported a 7.5 foot keel and was that a problem?

Ok, no problem so we started across the really wide Half Moon Bay towards the marina. The water got shallower and shallower. Hmmm. Called the marina again.  7.5 foot keel – is this going to be a problem?

A little later we called again, because the depth gauge was showing 7 feet(we’re 7.5).” No problem, we’re waiting for you at the harbour entrance will guide you into the slip.   I’m been doing this for 30 years and know exactly how much water we have here.” Sure enough I could see a small boat waiting at the entrance. Who am I to argue with 30 years?’

Ti make a long story short – the deeper we got into the harbor, the shallower the water (it was all silt at the bottom and by the time they got us to the slip, the depth gauge showed just under 6 feet. The keel was 1 ½ feet under the silt and we couldn’t get all the way into the slip!

What a bunch of turkeys! Oh they were so sorry etc etc and they would give us a special discount and only charge us 80 bucks for the night. Vinni and I would have left right away, but we were afraid we would damage our rudder if we tried to back out. We needed to wait until high tide to be able to leave. High tide was at 3 am, so it was up early and off with us. I wrote a scathing review on Active Captain, a website for marinas.

I also wrote a scathing mail to the dockmaster, telling him that he should be ashamed of himself, charging us for standing aground in his slip when he kept telling us to come on in – lots of water. To be fair, he refunded our money – but we’re still pissed at him.

We spent a night in the city and then on to Cape May, where we rented a car again, this time to go to an appointment at a New Jersey Immigration office. I’d apparently gotten over my senior moments and had the right day for the appointment. But the US Immigration is almost impossible to get to see. No way we could speak to an Immigration officer, but a clerk told us which forms we needed to fill out (we knew this having spent a long time on the website). So all in all a wasted day. We also drove up to Clinton and visited with my old childhood friend Wayne ( I’ve known him for, well let’s see………….59 years, so we go back a ways). He had gotten tickets to the US Ladies Open, played at the Trump National Golf course quite close to where we grew up. Interesting day to say the least.

Clinton, the small town near our school, has gone from a sleepy little town serving all the local farmers to the tippy-top of yuppiedom. Yes dear friends – Clinton is Yuppiedom personified. Café’s serving coffee where the description of how they make your cup of coffees rolls on for 3-4 paragraphs. A roll with cheese on it is not just a roll with cheese, but a “freshly baked hard roll, baked from natural whole grain, non-GMO organic wheat, hand harvested and milled by a family enterprise in Iowa. No preservatives, no chemical fertilizers. Buttered with lightly salted butter from free range grass fed cows, hand milked, churned on the farm etc etc.” I can’t remember the description of the cheese, but it rattled on for about 2 paragraphs.

This is Clinton? Oh well the waterfalls and the water wheel are still picturesque.

We also drove by my old homestead – I’ll leave the description of that to Vinni – suffice to say, the guys politics are right after my heart…………………………..(just kidding).

And that was New Jersey. Safely back in Cape May, we set sail early in the morning, around the cape and up into the Delaware river. The Delaware has headwaters in the Catskills (we actually saw the headwaters of the Delaware while driving around the Catskills) and it is difficult to grasp that that tiny stream can become so huge so fast. The bay is so wide that you can’t see across it and the river is wide all the way up to Philadelphia. Many years ago, you could sail up the Delaware to Trenton, get on the Raritan Canal, sail across New Jersey and end up in New York harbor. The Raritan Canal closed in 1932 so that is not possible any more. We are only going up just short of Philadelphia and going into the Chesapeake and Delaware Canal, linking the Delaware river with the Chesapeake Bay.

Vinni piloting Capri up the Delaware

It takes most of the day to sail up the Delaware. We made for a place called Reedy Point, where it it possible to anchor behind a long partially submerged dam. There is a narrow opening in the dam, allowing boats through and that was what we were shooting for. Along the way, we had company of our old friends the Navy boats. Coming up from behind we could see Brave, Fearless, Intrepid and Dauntless on the AIS. They finally overtook us (they sport a crew of 10 and are longer and don’t weigh as much as us), almost at Reedy Point. They took down their sails and continued through the canal, while we turned to go behind the dam.

Now getting behind the dam is not easy, as I noted above. There is a narrow opening, about 40 feet wide (Capri is 13 feet) that is marked with a red and green bouy.

So you ask – what’s the big deal?  Just sail through.

Yes dear friends – wish that it was but that simple.

The river is running at 3 knots and that means we’re approaching this narrow slot almost sideways. We’re making as much speed sideways as we are forwards and the slot is looking unbelievably narrow. There is no room for error here. We either go right through or Capri will be on the rocks with severe damage to both keel and hull.

Oh man – we’re through. Time to wipe some sweat off our brows and now we can breathe again.

But what an anchorage!  Here we are alone and my God, how peaceful.  We get out a bottle of wine and make a good dinner, enjoying the solitude. Next morning, it is a magnificent morning, time to relax, drinking an extra cup of coffee or two, simply enjoying this undisturbed anchorage.

The C&D canal was just that – a straight canal (still used by big ocean-going ships), we scooted through the 15 nm and turned the corner into the Sassafras river, dropping anchor at the edge. We followed a German boat and lay a half mile from them. Again – what solitude.

Tell me it gets much better than this……….

We love lying at anchor and it has been much too long since we have done so.

Baltimore is next up and we anchored deep in the harbor, almost at the center of the city. They done much to revitalize Baltimore and walking around we can see that they have succeeded.

The inner city has been rebuilt and they have managed to save most of the older building. There  where they have had to tear down the building, they have mandated that the new buildings must reflect the old style – so the waterfront is majestic and not filled with glass and chrome monstrosities of high-rises.

This beauty sailed right by us

We spent the weekend because we wanted to watch the British Open on TV at the local sports bar (well we are golf nuts), sailing Monday morning with Annapolis was our destination.

In Annapolis we discovered an unusually charming town – more about that in our next post.