It is not far from Baltimore to Annapolis, actually it is further from Baltimore out through the channel to the bay than it is from there to Annapolis. In the  middle of the afternoon, we rounded the sharp corner, turned into Spa Creek, sailed past a couple of Navy ships where the new Midshipmen were learning how to sail a ship (Annapolis is home to the US Naval Academy). A couple of miles later we turned into Annapolis bay, sailed past the Academy and caught a mooring ball. A mooring ball here only costs $35 and gives us the right to use the bathing facilities etc. 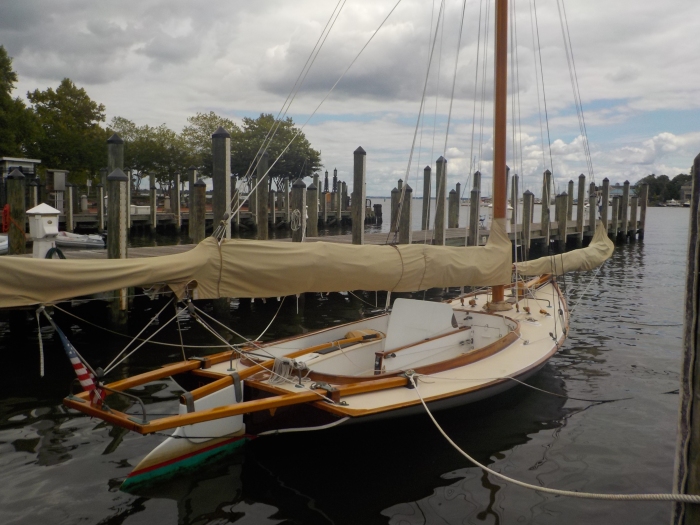 Replica of one of the first Chesapeake Bay racing boats

As I said, Annapolis is home to the US Naval Academy. A prettier location would be hard to find and as we sailed in we passed the Navy boats we had gotten to know sailing up and down the New Jersey coast. Here lay Fearless, Brave, Courage, Defiant, Audacious, Intrepid, Valiant and the rest, all in a pretty line. Wonderful to see.

The city, Annapolis, is called a “National Treasure” and it is easy to see why. Virtually every building in on the National list of historic houses and boasts of it with a small brass plaque.

The entire town and most of the buildings date from the early 1700’s, some earlier. The city was laid out as radials from the town dock, giving it a close, smallish feeling. The layout also included at big circle for the Statehouse and another for the Church (let us not forget the church).

Now we were ready for sightseeing. First, and not least, the Naval Academy, of course. In contrast to West Point, here you can wander freely around. There are some buildings with signs that say “no admittance” but otherwise, you’re free to wander once you’ve checked in. Check-in is relatively painless. You go to the visitors center, show a picture ID and they give you a small paste on badge that you need to wear while on the base. That‘s it. Quite a bit more welcoming than West Point.

There are many stately older buildings here, as there should be, and statues of famous Captains, Admirals etc., lots of old canons from famous battles and then there are the new cadets (Midshipmen). Just like at West Point, the new Midshipmen are required to attend a 6 week summer camp where they get a taste of life at the Academy. As we wander around, we see them learning how to march, how to stand at attention, at ease, how to fall in to a formation, how to do about face, turn in a wheel formation and much more. Life is hard.  Especially when it starts at 5:30 am with one and half hours of exercise. We see them running into the stadium and can then hear the cadence; up-down, up-down, up-down and 1,2,3 -1,2,3 -1,2,3. At 7 a.m. they finish, and it’s time for a bath, get dressed and be ready to salute the flag at 8:00 a.m., when the Stars and Stripes go up the flagpole (Vinni has gotten to know the Star Spangled Banner quite well, since we heard it every morning in Charleston as we lay alongside the Coast Guard station and now here where we also hear it every morning).

In town in their dress whites

I’ll let Vinni write more about the Academy, but it is impressive. We ate lunch at their restaurant where they claim to serve the best pizza in town. I don’t know if it is the best, but it is good and certainly the cheapest, $11 for 4 slices and two bottles of mineral water.

As I noted, the city, by American standards is old and has a glorious history. The town was founded in 1649 and was a small harbor until Marylands Colony (this was before the Revolutionary War) moved its Capital to Anne Arundt Towne and renamed it Annapolis. As an aside, Annapolis was named for the Danish Princess Anne, who later became Queen Anne of the UK.

The town grew through the 1700’s and became a large trading and merchant center for, amongst other things, the slave trade. Those that remember the television miniseries, ROOTS, will recall Kunte Kinte, the slave and his future generations the series encompassed. The real Kunte Kinte (yes, there was a real Kunte Kinte) was landed here and sold at auction in the town square by the harbor.

The town was also the fledgling USA’s Capital briefly. The Continental Congress met here after the peace treaty between the newly formed United States and Great Britain was signed in Paris. It was also from here that the call for a Constitutional Convention to be held in Philadelphia was sent out. And it was here in the (now) state capitol building that George Washington resigned his commission as General of the Continental Army, so he could be elected President.

Around 1910, 3 very high radio masts were built here, at the outskirts of town. They were (are) shortwave radio antennas and have been pictured on stamps and posters and in books. I vaguely remember seeing a poster of these when I was a kid (perhaps in a history book?), showing them in a drawing as standing in the US beaming radiowaves across the Atlantic to a similar radio tower in Europe, denoting that now there was instant communication between the two continents. Strange to think that here I am 65 years old and now I see something from my childhood that I never really understood was really as it was pictured…………….. 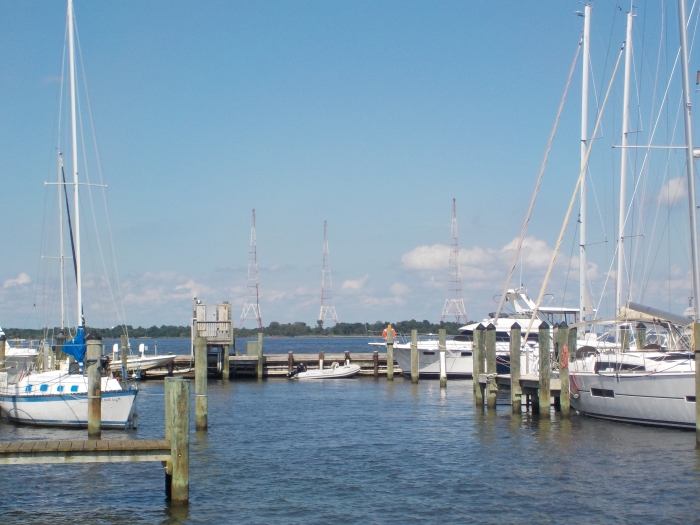 These three masts were pictured on posters etc

By the way, it was through short wave radio, picked up by these towers that the US learned that the first world war was over.

Today Annapolis has about 39,000 persons living here. Its placement on the bay gives it a magnificent location and it has also become an American center for sailing. Everything here is from the 17/1800’s and every building has their own little plaque signifying that it is historical. There are also those with a sense of humor……………………

Well, can’t live in Annapolis without a plaque…….

In 2003, a hurricane came through and the “surge” brought waters 2.13 meters above normal. Most of downtown was flooded and many buildings were damaged.

This is how high the “surge was

And then Vinni thought I needed a haircut. Normally she cuts it, but once in while she wants me to get it done professionally so she has something to follow. We easily found a barber here (look for the red, white and blue barber pole) and I got in line (this was a very popular place).

The line was clear out the door – note the barber pole

Great haircut and since this was a place where you also could get shaved with a straight-edge – I got that done also. You really have to trust the barber when he’s using a straight-edge – but I have to say that afterwards your cheeks are as smooth as a new-born baby bottom. 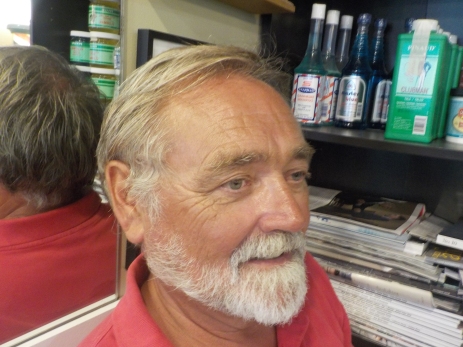 Before, during, after – by god he’s a handsome devil

We stayed a few days and then sailed over to St. Michaels, another charming (although smaller than Annapolis) town – this time on the other side of the bay. A whole town filled with perfectly renovated houses dating from the 17/1800s. Life here, just as in Annapolis, goes slowly and quietly. 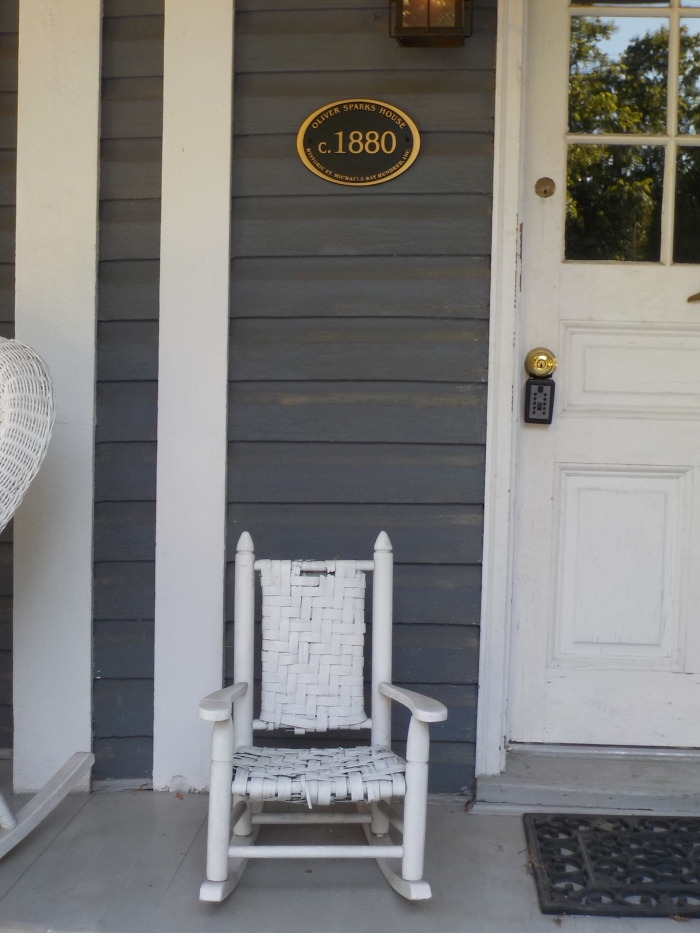 Unfortunately, the remote control for our anchor winch decided to give up the ghost here so we’ve sailed back to Annapolis to get spare parts. But  what a great sail we had. The winds were fine and Capri got a chance to show off, which she did, catching and then sailing away from a 42 foot Jeanneau Sun Odyssey, despite our being fully loaded for cruising and our having 12 year old sails. Anumber of other sailboats tried to catch but never made it.

Vinni and I aren’t racers, but as a fellow I know says: “Definition of a match race? two sailboats within sight of each other with their sails up.”